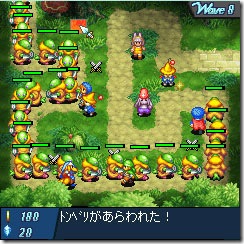 Square Enix tested the waters with a tower defense game of their own for mobile phones. Crystal Guardians W1 took classes from Final Fantasy Tactics and turned them into immobile towers. Three episodes of Crystal Guardians came out in Japan and none of them were released in North America.

Usually Square Enix’s mobile phone games like Crystal Guardians would stay in Japan, but the iPhone could be a platform for them. With any luck Final Fantasy IV: The After and Before Crisis: Final Fantasy VII will get released on the iPhone too.