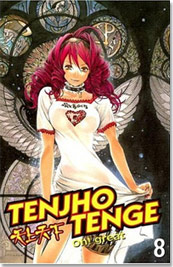 Come this July 1st, the CMX manga imprint owned by DC will be shut down, the publisher announced earlier this week. Best known for their translation of Tenjho Tenge and shoujo series such as Emma, CMX was part of DC’s Wildstorm division, headed by popular artist Jim Lee.

DC’s public statement regarding the closure was as follows:

Over the course of the last six years, CMX has brought a diverse list of titles to America and we value the books and creators that we helped introduce to a new audience. Given the challenges that manga is facing in the American marketplace, we have decided that CMX will cease publishing new titles as of July 1, 2010.

The shuttering of the CMX line does not affect the best-selling series Megatokyo which will continue publication, now as a DC Comics title with story and art by Megatokyo’s award-winning creator Fred Gallagher.

We’d like to take a moment to acknowledge the efforts and dedication of the CMX staff and to thank our fans who have supported CMX.