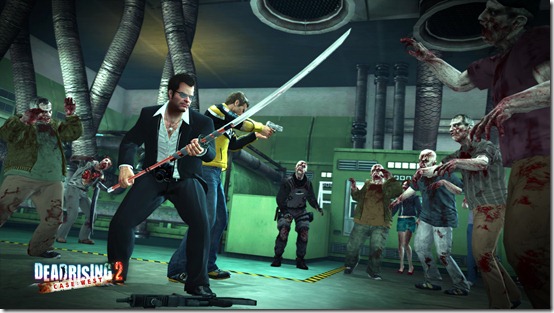 Dead Rising 2: Case West picks up directly after one of Dead Rising 2’s endings. Chuck is in a sticky situation trying to fend off an aggressive zombie when Dead Rising journalist extraordinaire Frank West comes to his rescue. West says he has a source within Phenotrans and the two take off in a helicopter to infiltrate a lab.

While Dead Rising 2 and Dead Rising before it had players debating whether to complete key objectives, kill psychopaths, or saving survivors, Dead Rising 2: Case West is fixed on taking down Phenotrans. A mysterious, perhaps familiar, source gives Frank and Chuck goals like acquiring security codes and building a bomb. There are survivors to rescue, but you don’t have to escort them to a safe house. Once you fetch what they’re searching for survivors escape on their own. You’ll have to scout around to find people to rescue, since you don’t have someone scanning security cameras cries of help are the main hints you get. As a reward for saving lives (and fetching human livers?), Chuck and Frank can acquire PP (read: experience points) and keycards to open shortcuts in the lab.

Capcom, it seems, focused on combat with Dead Rising 2: Case West. Rooms are small, typically open areas, filled with zombies to maim. Like Dead Rising 2, Chuck can create combo weapons at workshops. Some weapons like the laser sword (gems + flashlight) and flamethrower (water gun + gasoline) return. Many combo weapons like the always useful beer hat and knife gloves (a personal favorite) are out. To go with the more industrial feel, Blue Castle Games added a few new combo weapons to create. The lightning gun acts like a railgun and fires an electric blast that goes through zombies. Chuck’s Reaper (katana + sickle) is this game’s paddlesaw, it’s for crowd control. There are only a handful of new weapons to make and many of them fill the role of a missing duct taped gun or sword. 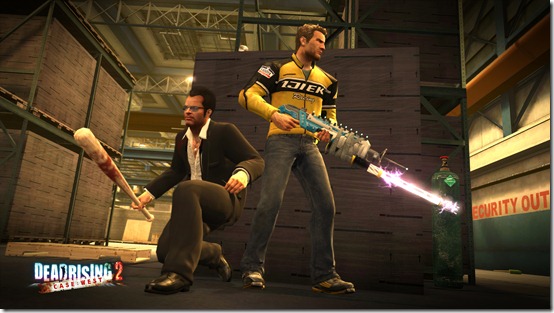 The computer controls Frank in single player mode. No, you don’t unlock Frank after you beat the game and there isn’t some kind of secret code to play as him. If you want to play as Frank you need to join a co-op game. Otherwise the computer controls him. Frank, in single player mode, is invincible. Chuck can give him weapons too, which replace his standard bat. There’s a little trick players can use when giving weapons, if you have a gun with only one bullet left you can give it to Frank and suddenly he’ll have more ammunition. You can do the same with combo weapons that are about to break.

In addition to zombies, you’ll run into more human enemies that chase you. Zombie wranglers can shock Chuck with an electric rod, armed guards perched in a tower fire machine guns, and a new kind of hazmat troop smashes characters with an impact hammer. Photography is back in Dead Rising 2: Case West, but it feels like an afterthought. Sure, you can snap pictures of zombies and evidence for a little extra PP. However, photography is optional, its not even part of the main missions.

You can easily complete this episode in one sitting, it’s about the same length as Dead Rising 2: Case Zero even though it’s double the amount of Microsoft Points. The story in Case West ties the two games together nicely and answers some questions about what happened to Frank West after Dead Rising. By the end of the Xbox Live Arcade game you’ll probably have more questions. Dead Rising 2: Case West ends with a cliffhanger, which makes this game seem like a set up to put the two heroes together in Dead Rising 3.