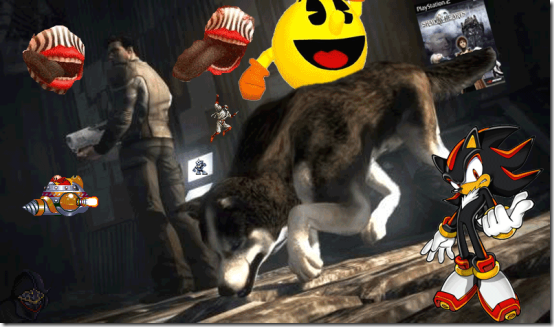 Quantified by the ratio of correct to incorrect entries, this was our toughest contest to date. To enter, you had to identify the “shadows” in the picture and we weren’t talking about physical shadows. Jack’s dog in Dead to Rights: Retribution is called Shadow and we added other things called “Shadow” inside. They are:

Dr. Robotnik, Pac-Man, and the “ninja” were red herrings. The “ninja”, on second thought, may have been too powerful a decoy. Yes, he’s from Shinobi and could have represented Shadow Dancer, but his name is not “Shadow” so technically he shouldn’t count. I threw him in there as a trick because “shadow” is a generic ninja name.

Anyway, reading the entries was a lot of fun. I saw some creative responses so thanks for entering everyone! These are the winners…

All of you should be getting an e-mail from me shortly. If you don’t receive one please e-mail me us so we can pass over your contact information to Namco Bandai who are fulfilling the prizes.