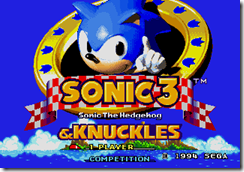 Hot on the heels of the digital Dreamcast games announcement are leaks for another wave of Sega Genesis games.

Australia’s Classification Board rated Decap Attack, Flicky, and Sonic 3 & Knuckles, a sign that these games will be re-released on some digital platform. Wii’s Virtual Console seems like a prime candidate since Sega wouldn’t have to update these games at all.

Decap Attack, a game where you play a mummy that throws its own head, is probably too offbeat and obscure to get a full remake.