Interactive Brains first DS title is based off their wildly successful cell phone game of the same name. Deep Labyrinth brings together some the talent of Masato Kato, the scenario designer of Chrono Cross and Yasunori Mitsuda who did Chrono Trigger’s score to create an atmospheric dungeon dwelling game. With all of the big names behind Deep Labyrinth gamers might be disappointed to know that Deep Labyrinth isn’t very… deep. Mix one part stylus sword slashing and ten parts of dungeon exploration and you’ve got the Deep Labyrinth. 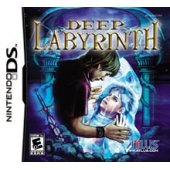 Deep Labyrinth is actually two separate stories packed into the game. The first episode is designed specifically for the Nintendo DS. Shawn and Ace’s scenario begins with a short video of a boy and his dog riding in their parent’s car. After the car gets a flat tire, Shawn’s dog, Ace, runs into a mysterious mansion. Shawn runs into the mansion to chase after his dog when he discovers a portal that throws him into another world with talking mice and purple platypi that recover his HP. The theme of the first story is about lost memories. While the first episode feels like an Alice in Wonderland tale with hulking talking elephants and a colorful universe the second story is much much darker.

The second story entitled “Wandering Soul” is based off of the original cell phone game. It begins with a man talking on his cell phone when he is whisked away to another world where an armored skeleton appears before him. He sees a sword in the distance and grabs it. Quickly he discovers that he is trapped in a labyrinth where a mysterious girl’s visage is seen save crystals. The dungeon in the second episode is drab with blue walls and it feels more like a labyrinth than the open forest environment in Shawn’s story. The monsters also take a turn towards the fantasy direction. You will fight golems, dragons and reapers in the second episode. Out of the two stories, Wandering Soul is a lot more interesting than Shawn & Ace’s scenario. However, to truly appreciate Wandering Soul you have to spend time exploring the labyrinth.

Exploration is really what Deep Labyrinth is about. Imagine an RPG without an overworld, cutscenes and towns. All you have left are dungeons and combat, which is exactly what Deep Labyrinth is. With the D-pad (or the face buttons if you’re left handed) you can move around and explore the great beyond. Handy maps on the top screen show approaching enemies, treasure chests and your progress in the level. If you want to get the most out of the story you’re going to have to seek it out. Hidden in corners are floating masks, tablets and mouse soldiers that tell the story behind each episode. Also hidden are save points, which can make Deep Labyrinth frustrating to play for short periods. If you only have five or ten minutes there is no guarantee you’re going to discover where the next save point is. Fortunately you can throw the DS into sleep mode, but a quicksave feature would have been a welcome addition.

While searching for the exit or the key to open the door to the exit Deep Labyrinth constantly pits you against monsters. Early on you’ll fight slimes and bugs while you learn the controls. In Deep Labyrinth there are no menus to select spells or special attacks. Everything is done in real time with the stylus. If you want to slash your sword you draw lines with the stylus to emulate the strike. You can make horizontal cuts and vertical slashes with the stylus. Or opt for using magic spells by recalling Kirie characters. When you open up the 3 x 3 kirie grid players draw symbols on the screen, like a small diagonal line for an ice spell. More spells can be obtained by scouring tablets and leveling up. Spells also serve a second purpose, opening sealed doors to progress through the dungeon. At first the combat system is quite entertaining, mainly because of the novelty. However, after ten minutes you’ve seen all it has to offer. Players will use the same sword strikes throughout the game and there aren’t many strategies besides slash and cast. There are other ways Deep Labyrinth uses the touch screen like selecting who to talk to and breaking walls by tapping the screen.

One of the surprising aspects of Deep Labyrinth is Mitsuda’s environmental soundtrack. The score sounds amazing and it helps establish a sense of mystery in the game. Hands down, Deep Labyrinth is really just a high profile dungeon crawler with decent 3D graphics and touch screen control. There isn’t a strong sense of character development that RPG gamers have become accustomed to or even much of a story to discuss. While it lacks a gripping narrative, Deep Labyrinth can still pull in gamers who just want to jump into dungeons and start slashing away.

+ Pros: Two storylines and an interesting use of the touch screen make Deep Labyrinth an original addition to the DS library.

– Cons: The repetition factor is extremely high and the bland dungeons make it seem worse than it really is. Also sparse and well hidden save points make Deep Labyrinth less than ideal as a portable game.

Overall: Deep Labyrinth has an innovative control set up and a sense of mystery around it that is blunted by the high amount of repetition in the game.