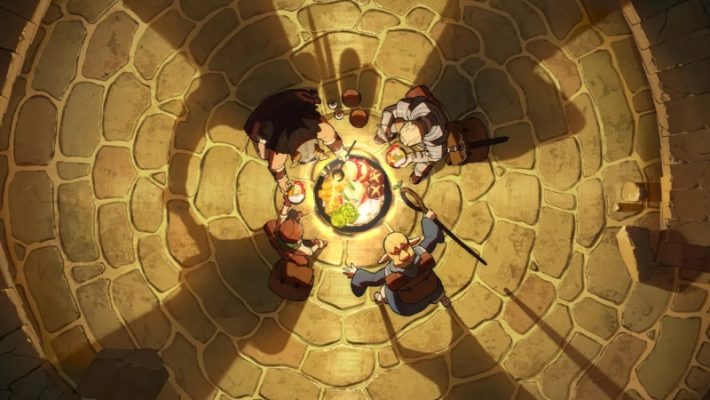 Anime fans hungry for a new fantasy show have a new treat to gnaw on. Studio Trigger, of Kill la Kill and Cyberpunk: Edgerunners fame, is animating Delicious in Dungeon. The announcement was made after Trigger opened an official website and Twitter account for the show. Fans could also read the news on a wraparound banner included with the 12th volume of the manga, on sale in Japan.

Also known as Dungeon Meshi, Delicious in Dungeon is a manga created by Ryoko Kui. It follows a party of adventurers exploring the depths of a dungeon located on a remote island. Due to hunger stemming from a loss of their supplies, the party is defeated by a massive red dragon. With one member stuck in the dragon’s belly and no money to buy supplies on the surface, the party resorts to desperate measures. They choose to kill and eat monsters in the dungeon itself to save money while they go back to rescue their missing companion. Along the way they meet new friends, make new enemies, and learn about dungeon ecology, to boot.

So far the only look at the new Delicious in Dungeon anime series is a piece of teaser art showing the members of the party camping in the depths of the dungeon.

That being said, this isn’t Studio Trigger’s first brush with the story. In 2019, Trigger animated a commercial for the 9th volume of the Delicious in Dungeon manga. Check it out below, archived by YouTube user Whole Milk.

The Delicious in Dungeon anime is in development, with no specified release window. Yen Press publishes the manga in English. The development team for indie game Dungeon Munchies was inspired by the manga, stating as much in an interview with Siliconera.