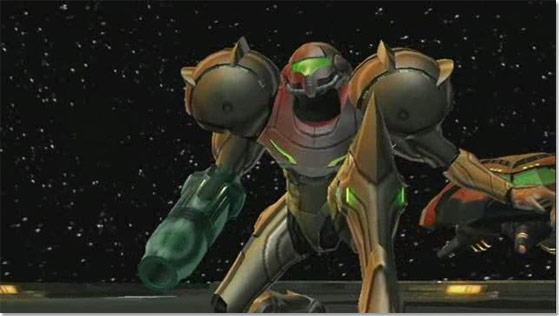 Things are not going your way. A short while ago, you made your way off a Space Pirate vessel where you had to deal with one of the pirates’ maniacal experiments gone wrong. While the Parasite Queen herself wasn’t much more than a mere distraction — a fun diversion from the hordes of cut-throat pirates themselves — it’s the aftermath of your battle with her that left you reeling.

As luck would have it, her majesty’s corpse toppled straight down into the ship’s reactor core, setting off a rather inconvenient explosion, which you barely scraped through with all your limbs intact. Running through corridors of flashing red lights, trying to find the exit amidst the usual Space Pirate jackassery — don’t they ever know when to retreat? — while having your Varia Suit’s functions fail one by one was quite the task, even for an experienced individual of your calibre.

Now, you’re stuck on an alien world, Tallon IV. Your pursuit of the pirates has led you to an area of the planet named the Chozo Ruins, once home to the ancient civilization you’re so familiar with. Initially, you assumed being surrounded by Chozo architecture would stir up long lost feelings of nostalgia…maybe even a sense of belonging. Unfortunately, that is far from how you feel.

Your early journey through the Chozo Ruins so far has been like walking through a dimly lit minefield. Everything is dangerous. Everything.

Every inch of this…wasteland…reeks of hostility. No matter where you go, you’re surrounded by pools of murky, toxic waste eating away at your boots and your Energy Tank. At every corner you turn, dwell these…things…with varying degrees of intelligence, but all incredibly territorial. And they’re all out to tear you apart for invading their territory. Some are exceedingly vicious merely to protect themselves. Others have no regard for their own lives while they mercilessly fling themselves at you one after the other. The inner sanctums of these tombs offer little light — and what little there is, is a shade of pale green, reflecting off of the surface of the poisonous water that somehow supports these life-forms.

And all you have going for you is a suit on life support and a Power Beam so weak, you may as well just hit people over the head with it.

No, all you feel so far is oppressed and suffocated. It’s the personification of gloom and doom — as if every brick and pillar of this place is taunting you. And yet, you must press on, for in order to find tools to sustain yourself better, you must first suffer. And so, you set about exploring the ruins, being constantly hounded at every step by the very flora and fauna, digging deeper and deeper, barely managing to keep yourself alive. 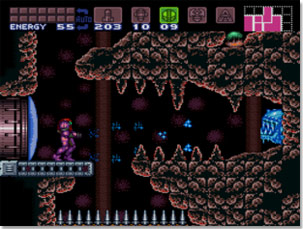 Metroid Prime is about developing and building an atmosphere that evolves continually throughout the game. Design-wise, it really does feel like Super Metroid in first-person. The exploration, the backtracking, the constant sense of discovery…it’s all there. You’re just thinking in 3D space now, instead of on a 2D plain.

What really sets Prime apart though, is that feeling of "progression" that everyone automatically associates with Metroid.

I like Super Metroid a lot, but I could never completely understand people that talked about how they felt themselves growing stronger throughout the course of the game. Perhaps this is because, no matter how many energy tanks or beam upgrades you had, enemies always felt like a threat that you had to either eliminate safely from a distance, or avoid, just like in any 2D sidescroller. Prime, however, is all about giving you options. It really uses 3D space — including height — to its advantage and it allows you to approach enemy encounters from several different angles. 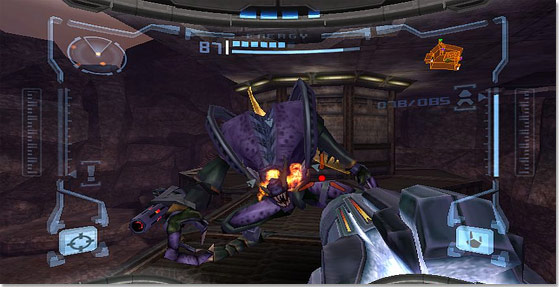 Are you going to roll past your opponents in morph ball form and try to get behind them? Or would you rather take cover behind the countless objects scattered through the environment as you thin their numbers? Perhaps it’s even possible for you to slip by completely unnoticed? The more tools you collect, the more options you have.

Every tool at your disposal — even the beam you choose to equip — plays a role in how you could approach any given situation in Metroid Prime. Unlike Super Metroid, you’ll find that the Ice Beam isn’t the solution to all your problems here. For example, the aerial Space Pirate troopers tend to go kamikaze when they’re on the verge of death. If you don’t watch out, they could very well take you with them. You’d think missiles would work well against these guys, but they don’t, really. Instead, I found myself sticking to the Plasma Beam early on, even after Super Missiles and the Ice Beam were available to me. The suit and weapon upgrade system approaches growth better than a lot of RPGs do.

Case in point: Late in the game, I wasn’t afraid to jump into a pit full of angry Baby Sheegoths and take them out up close and personal. Early on, the little critters were practically the bane of my existence. Once I acquired the Plasma Beam, even fully grown Sheegoths — that at one point felt like a boss encounter — became easy to tackle. In fact, I found myself deliberately avoiding them because I actually felt sorry for killing innocent creatures that only ever lashed out in self-defense. It was a very different sentiment from the kind of hatred I felt toward the Sheegoth family when I first entered the Phendrana Drifts.

The other aspect of the game that never ceases to amaze is the level design. I don’t know how they do it, but there’s always something that fails to catch your eye the first time you visit an area and becomes more apparent when you return. You’ll find yourself thinking, "Huh. Was this always here?" a lot. It really is pretty incredible.

In contrast, Metroid Prime 3: Corruption is a very different game. It’s more about impressing you at every turn than it is about bringing classic Metroid elements into 3D. I hadn’t played much of Metroid Prime 2, originally, so going from 1 to 3 made a lot of the changes in the latter game very apparent. Playing Corruption, it’s obvious that coming off of its two very successful predecessors, Retro Studios were comfortable with the idea of experimenting a little. But let’s start from the beginning — namely the basic design improvements over Metroid Prime. 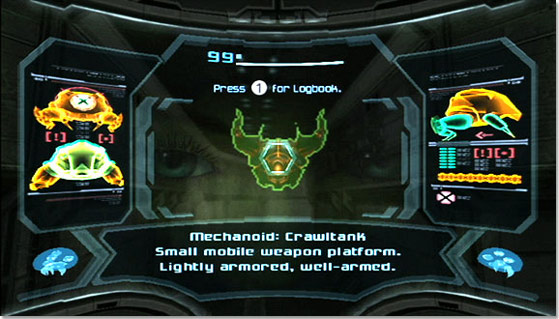 The UI in Corruption is God-like. Metroid Prime 2 was a good half-step but 3 is where the scan visor really shines. It’s so easy and so intuitive to use compared to the first game where the only indicator of an object being scanable was a small red emblem over its surface. As a result, it was easy to miss objects you could scan, especially in bright outdoor areas. Here, every object has a nice outline around it and they’re all colour-coded to boot, ensuring you won’t miss anything important. The UI designers also did away with the "scanning" bar, opting for a replacement that feels like it fits in with the functionality of Samus’s suit a lot better. It even "sounds" satisfying.

The most awesome detail though is that Samus’s face is now reflected in the scan visor at all times. What’s more, her eyes move and dart in sync with your movement. As the game goes on and she gets more poisoned by Phazon, you can even see traces of the poison trickling over her face depending on the level of "corruption."

The beam system has been overhauled. You don’t get to choose between four different beams now. Instead, they all stack, and there is no Ice Beam any longer (you use Ice Missiles instead). This is where Corruption really begins to deviate from Metroid Prime. You’d be right to suspect that the combat in this game doesn’t offer you as many choices as Prime did. Since your beams now stack, your single beam serves as an all-purpose weapon that you’ll use against everything. On the upside, this means Retro had to include other gameplay elements to keep things interesting. 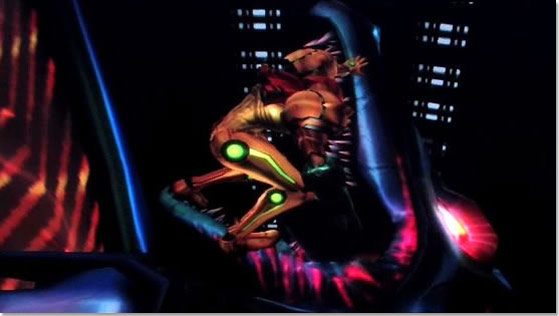 And boy, did they ever. I mentioned before that Corruption is about constantly impressing you every chance it gets, and this is most apparent in the variety of stuff you’ll get to do during the course of the game.

Early on, while you’re trying to hold off a Space Pirate invasion, you’ll find yourself rolling around in a morph ball track, trying to get to a series of generators you must activate. Just when you think things are going your way, Ridley drops out of nowhere onto the track, and starts to peck and claw at you, forcing you to deal with him first. The cool part is, there’s no cutscene or loading screen that pauses the action, signaling his arrival. You’re rolling merrily along one minute and being pecked to shreds the next. Your encounter with him eventually leads to an awesome boss fight where you’re blasting away at each other apart during a freefall where the perspective constantly shifts depending on who gets to be "on top."

Little touches like having to rip protective shields off of Space Pirates with your grapple or knocking Steambots over in ball form are fun, too. Oh, and later on, you open up a Spider Ball track over Elysia, a city floating in the sky. From that point on, you’re required to make your way around high above the city in ball form, with nothing but empty space under you. It’s a real thrill. I liked that the game led me through so many different experiences, even if it felt a little more linear as a result. 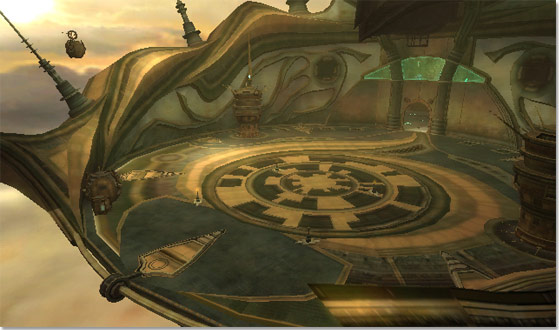 Corruption tends to feel "grander" in every way. You visit three entirely different planets, and none of them look anything like each other. The pirate encounters don’t feel as threatening as in Metroid Prime, but there’s also a sense of you fighting something that is much bigger than the Space Pirates this time around. The boss fights in this game are better than both Prime 1 and Prime 2. The pirates are the tools of Dark Samus’s ambitions, and that’s exactly how they feel. There’s so much going on at once, it’s very entertaining.

The artwork is miles ahead of anything that was ever accomplished in Metroid Prime or Prime 2, too. For one thing, it looks like Retro finally hired a character artist so human faces don’t look like plastic dolls any more. Even Samus’s PED Suit looks more aesthetically pleasing than the suits from Prime. But it’s the enemies and environments that are really something to behold. Just walking through Elysia feels incredible. There’s so much detail everywhere, it’s staggering. There also seems to be a lot more stuff to scan in this game, so factor in that you can read up on everything that catches your eye.

Overall, the game feels much more streamlined than both its predecessors and chooses to focus on taking you through a more narrated experience. There are even some nice touches that help make Samus seem a little more "human," which I really liked. Personally, I think it’s great that Corruption is different from the other two games. Doing the same thing all over again might’ve gotten a little boring and to Retro’s credit, Metroid Prime 3 didn’t feel boring in the least. In fact, I think it’s my favourite of the trilogy.