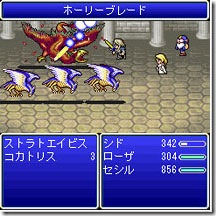 We mentioned Final Fantasy IV: The After here many times. Always with an undercurrent of disappointment since the direct sequel to Final Fantasy IV is a Japan-only mobile phone game. Recently, Square Enix found ways to bring their mobile phone games outside of Japan. Crystal Defenders came out for the iPhone and is being retooled into an Xbox Live Arcade / PlayStation Network / WiiWare game. This happened a few months after we discovered a trademark for Crystal Defenders.

On the European Patent and Trademark database I found a trademark for “The After Years” registered by Square Enix. While this isn’t 100% related to Final Fantasy IV: The After, it sure sounds like an alternate and better worded international subtitle.

What do you think? Is the rest of the world going to learn the fate of Kain and meet Prince Ceodore? If so for which platform?

Update: This news is for the US too. Square Enix registered “The After Years” here too.