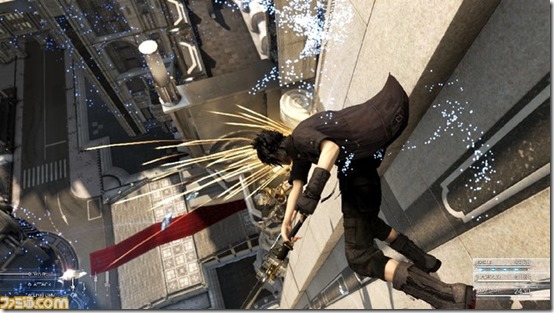 We recently got a look at a couple internal interviews conducted by Square Enix, where director Tetsuya Nomura revealed that Final Fantasy XV will be considered for hardware that uses DirectX 11 and how they had to recreate graphics after losing the data for the original Kingdom Hearts.

In a new Famitsu interview, Nomura shares new information regarding Final Fantasy XV, along with some comparisons to the Kingdom Hearts series.

In Final Fantasy XV’s gameplay trailer from E3, we got a good look at the action portion of the game, that showed Noctis warping around while using different weapons to take on Iron Giants and a Behemoth. According to Nomura, the scene was that of a very high leveled Noctis, who makes use of various weapons and his warping ability. In the early stages of the game, it won’t be quite the same. 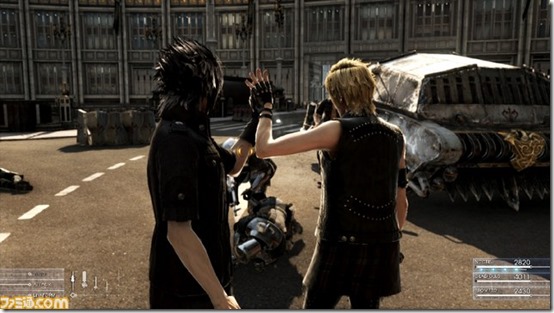 Famitsu points out that the trailer seems to show a lot of cooperative actions between Noctis and his allies. They also mention how some people may be concerned about whether these actions will make the gameplay a little too complicated to control.

“The starting point will have a sense of control that is similar to that of Kingdom Hearts’ ‘easy and refreshing action,’ so it won’t be difficult,” says Nomura. “Most of it will come pretty naturally to you. We’re currently testing out different operational methods with each hardware. Regarding allies, in addition to cooperative attacks, there will also be situational actions, which will be part of various scenarios in battles.”

In Final Fantasy XV, you’ll get to ride on Behemoths and pull off other extravagant actions against enemies. Nomura also mentions that the free-run aspect doesn’t only apply to the map, but also monsters. For example, you’ll also get to climb onto monsters and aim for specific parts of their bodies. 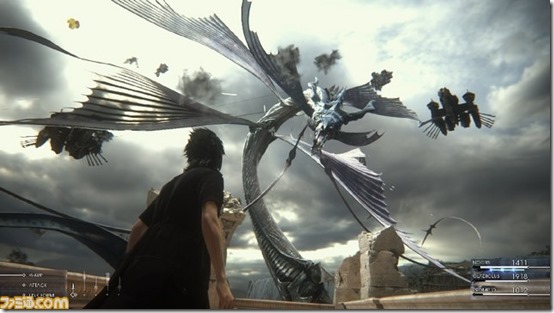 Nomura reiterates, “There’s a battle where Leviathan is causing a waterspout. There’s a scene that shows a fight inside the tornado while jumping between the debris of collapsed buildings. I believe that boss fights will feature such particular flashy situations.” 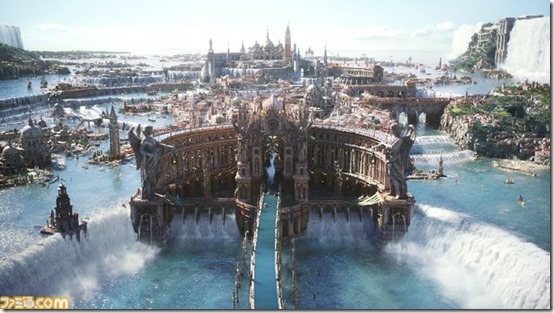 Speaking of sea monsters, Nomura also revealed some information regarding the nation that appears to have an abundant supply of water. According to Nomura, the nation of Accordo (pictured above) is heavily inspired by the city of Venice, Italy. Nomura visited Venice visited back in 2004 and 2005. In addition to Accordo, Lucis, Solheim and Tenebrae are the four great nations that were originally entrusted to protect the four crystals. However, the Kingdom of Lucis remains to be the only one that’s been able to protect it up until now. There will also be several cities and towns in the world of Final Fantasy XV. 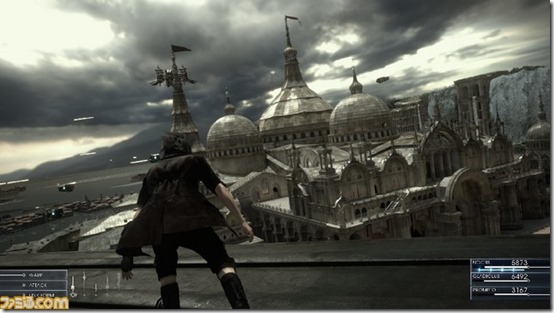 Some fans have been curious about the bottom-left part of the screen that appears to indicate a variety of weapons. According to Nomura, it was originally set in a way where weapons would automatically switch according to the combo structures. This has since then been changed, allowing players to have the option to select their own weapons at all times. In regards to other commands and gauges, Nomura will be revealing more in the near future.

We’ve seen the speed that Noctis is capable of in the gameplay trailer from E3. Nomura, who says they’re focusing greatly on the sense of speed, compares it to the Kingdom Hearts series in that players can get a grasp of the character’s movements, but a person who is simply watching might not understand what’s going on.

The two upcoming titles may have some similarities, but they’re not quite the same, according to Nomura. Famitsu asks about the difference they have planned between Final Fantasy XV compared to Kingdom Hearts.

“While Final Fantasy XV focuses on the realistic side of things, Kingdom Hearts is more about the ‘bold action,’” says Nomura in regards to the comparison. “In short, it’s about having movements that wouldn’t be possible, but making it look real instead of unnatural. In a way, it connects it to Kingdom Hearts’ fresh characteristics.” 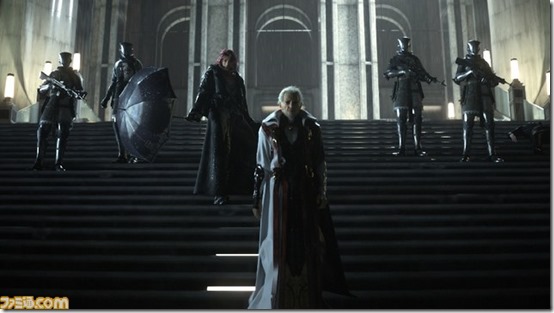 Famitsu also expressed their curiosity toward the two characters who appear to be villains (pictured above). One is an older man with white hair and sharp eyes, while the other appears to be a peculiar redhead.

“These two are are hostile characters who are against Noctis, and there will be plenty of other villains” says Nomura. “The red-haired character is voiced by Keiji Fujiwara, so we decided to give him red hair. Mr. Fujiwara voiced the roles of Reno from Final Fantasy VII: Advent Children and Axel from the Kingdom Hearts series, so we decided to go with red hair to keep the same flow.”

Finally, Famitsu points out that there appears to be an overwhelming amount of male characters. Nomura jokingly responds, “At the end of the trailer in the part with the aligned faces, there’s one new female character… Okay, it’s full of guys (laughs).”