After Disgaea: Hour of Darkness became a surprise hit fans have been eagerly awaiting a sequel. Disgaea 2: Cursed Memories has been years in the making and after all that time Laharl and Flonne have been thrown to the side in lieu of a new story with Adell and Rozalin. The duo is in search of Overlord Zenon. Rozalin wants to meet her father and Adell wants to defeat him and reverse the curse on his family. While the story isn’t as gripping as the original, Disgaea 2 is a clear improvement over its predecessor. Read on to find out why. 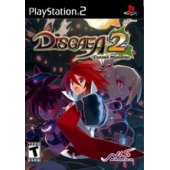 The Disgaea series is designed for gamers who love strategy RPGs. The game is almost entirely about battles and manipulating the game mechanics with a few interjections of story here and there. Players start out in Adell’s hometown, Holt Village, which is a base for the game. In Holt, Adell can speak to shopkeepers to equip new weapons, speak to his family, but most importantly use the dimensional gate to enter battles and progress through the game. Combat in Disgaea 2: Cursed Memories is on a standard grid where you can command an army of ten to do battle with a horde of monsters. Players can attack with their weapon, cast spells and use skills to complete the mission. However, the order of attacks and character placement is more important in Disgaea 2 than most strategy RPGs. By placing your characters adjacent to each other and then selecting attack you have a chance of doing a team attack. Team attacks bring together up to four characters for a powerful group attack. Also players need to watch out for the order of attacks, if you attack one enemy over and over you can tack on additional combo damage.

Think that’s complex? It’s just the beginning. Disgaea 2 also let’s players stack up a team of party members for the famous tower attack. A tower attack is an uninterrupted combo, plus when your army is stacked up on a single square only the bottom member is able to be hit. Tower attacks are a clever way of protecting your weaker members if you place a strong character at the trunk. Lifting characters is another important tactic since in some battlefield you’re forced to lift and throw party members to put them in range to attack. Lift & throw is a technique required to beat the game since battlegrounds are purposely designed with gaping holes and if you go into the item world lift & throw can save a lot of time. Also on the battlefield are geopanels, colored squares that can have dramatic effects depending on which geosymbol is on a colored panel. Geopanels can make characters who stand on them invincible, deal two attacks in a row or have adverse affects like drop fire resistance down 50%. Don’t like how the geosymbols are laid out? Move to a different square or destroy the symbol to remove the effect for good. Once again positioning plays a pivotal role in Disgaea 2’s battle system.

Like other NISA games Disgaea 2 has a bunch of classes to master. Basic classes like warrior, magicians, healers and thieves are complimented with a bunch of unique monster classes and geomancers. Prinnies are in the game and they have the special ability of exploding when they are thrown. Female ninjas (kunoichi) have ranged attacks like MinMinMin which puts enemies to sleep from a far distance. And who can forget Magic Knights who have the ability to use magic spells like Giga Fire plus powerful weapon techniques where they can attack and cast magic in one turn. While there are a lot of different classes in Disgaea 2: Cursed Memories many won’t be available at the start of the game. To unlock all of the classes and get the most out of the game players need to spend time with the Dark Assembly. Plead to the senators to change the items at the shop or to make party members with the “sinner” class. Pretty much everything in the game can be manipulated by passing the right bill. Players can even go as far as to make Adell a senator, but to get anything done in the Dark Assembly you’re going to have to pull some strings. The Dark Assembly is made up of a group of senators that can be swayed to your side by bribing them with rare items or slipping them some booze to confuse their decision. Besides the cost of items players need to spend mana to get bills passed. Mana can only be earned by fighting, which means its back to the battlefield after each successful or failed bill.

Mastering the Dark Assembly is key if you want to make ultra powerful characters over level 1000. Players can pass bills to triple experience points or reincarnate as a Prinny and start leveling up all over again with a new set of skills. Disgaea 2: Cursed Memories gives plenty of options to create an invincible army. If you really want to get into the game there is always playing around in the item world. The item world is a series of randomized optional dungeons inside every single item in the game. Fighting in the colorful item world strengthens items and gives players another place where they can level up. Inside special subpoena items players can find the dark court and grant felonies on party members. Felonies can be “atoned” for via the Dark Assembly to power up a character even further.

Now if this seems hardcore, it is. Disgaea 2: Cursed Memories is one of the most complex strategy RPGs to date. On the pro side genre fans will love seeking out all of the surprise endings and countless hours of combat. On the negative side Disgaea 2 might be daunting on paper. If you really want to just get through the game’s story it will set you back around 45 hours or so, but the best part of the games well after the game is completed. So in a way the game’s complexity is a blessing and a curse.

Something we haven’t quite touched on yet is the story in Disgaea 2: Cursed Memories. It has a clear theme about family and what it means to be part of one. It isn’t immediately as gripping as Laharl’s selfish tale of taking over the underworld, but it grows over time. Part of what makes the story interesting are the secondary characters like the floating frog, Tink, who speaks with a French accent and the unpopular dark hero Axel who would do anything to be famous again. The original cast does show up, mainly fan favorite, Etna with her Prinnies, but the story really is about the new group of heroes.

So what’s the final verdict on Disgaea 2: Cursed Memories? It’s a great game if you’re a fan of strategy RPGs. It packs in everything fans of the series and the best of the genre in one game. On the other hand the game’s strength, its depth, is bound to perplex players who aren’t accustomed to grid based combat.

+ Pros: Incredible gameplay depth and plenty of side quests that make Disgaea 2 a lot of bang for your buck.

– Cons: Some of the best elements of the game like the item world and the secret characters will only be seen by hardcore players.

Overall: Even though there is a new cast of characters, Disgaea 2: Cursed Memories retains the sense of humor that the original game is loved for and adds in even more depth than the original game.

By Alistair Wong15 hours ago

By Sato16 hours ago

By Alistair Wong20 hours ago