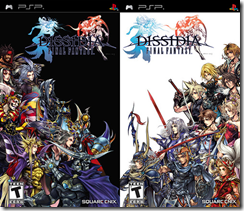 CESA, short for Computer Entertainment Supplier’s Association, has been tracking illegal downloads of top selling handheld games. Out of all the titles – DS and PSP – Dissidia: Final Fantasy was downloaded the most.

According to their data, the PSP game was downloaded 5,281,223 times. CESA estimates a loss of 30,631,093,400 yen ($335 million) in sales. The dollar amount is questionable due to used game sales, price drops, and people who would never have purchased Dissidia anyway. In spite of those factors that number is still staggering.

These are some of the other top pirated PSP games developed in Japan.

Not all top selling PSP games were heavily pirated. Konami’s Power Pros Portable 3 is the 12th best selling game and it was only downloaded 4,358 times. SD Gundam G Generation Portable, the 20th title in Japan, also had a comparatively low piracy rate with only 65,112 downloads.

CESA’s figures the top 20 selling games in Japan were downloaded 23,249,418 and cost the industry 118 billion in damages.