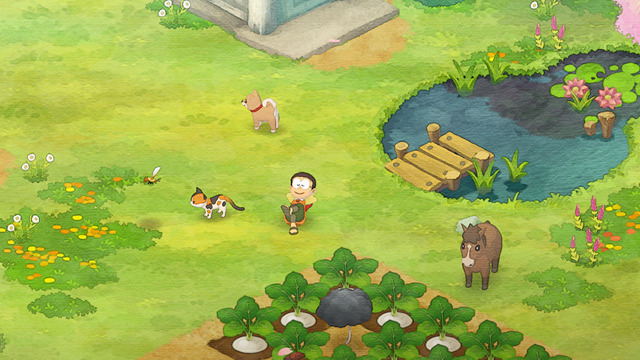 Doraemon: Story of Seasons plays well enough on the PlayStation 4. If you have the Switch or PC versions, there really wouldn’t be another reason to re-purchase the game. However, if you are looking for something to scratch that farming simulator itch, you may want to consider picking up the PlayStation 4 port if you don’t already own the other versions.

That being said, it comes with the same caveat as the Switch title. This includes the slow start before the farming simulator fully blooms. Doraemon: Story of Seasons doesn’t hide that it was made for a younger audience with the handful of tutorials and the narrative that accompanies it. Unlike Story of Seasons: Friends of Mineral Town, you aren’t immediately thrown into the country bumpkin lifestyle. Instead, you are introduced to characters through brief cutscenes and are taught the basic gameplay mechanics carefully and thoroughly. Which is great for children and for adults who haven’t fully stepped into the genre or might have felt overwhelmed without clear tutorials in other farming simulators.

Where Doraemon: Story of Seasons succeeds is its visual style. Everything looks awash with watercolor paint and carefully blotted details. Every map, character, and item has a clear texture to it which contributes to its evocative and charming visual identity. It almost makes me wish that other installments of the Story of Seasons series would follow the same route, as it encapsulates such an idyllic atmosphere you would expect from a feel good farming simulator.

The gameplay is fairly basic, and anyone who has touched Story of Seasons, Harvest Moon, or Stardew Valley will be familiar with the loop. You wake up, tend to your crops and animals, and forge friendships with the residence of the small country village you live in. There are occasional festivals you can participate in to win rewards. All events are seasonal and have their own gimmick or requirement in order to participate. Since Doraemon: Story of Seasons clearly samples from the Japanese children’s show Doraemon, you get a sampling of fun Japanese season activities. These include splitting watermelons and racing beetles.

Overall, Doraemon: Story of Seasons is a charming experience for the PlayStation 4, similarly to the Switch and PC versions of the game. However, if you’re a veteran of the franchise Doraemon: Story of Seasons may not be what you’re looking for. If you have children this is the perfect entry to get them interested in farming simulators, or even something to entertain them while indoors. And if you’re new to the genre entirely and want something a little more direct then this may be the Story of Seasons game for you.

Doraemon: Story of Seasons is immediately available on the Nintendo Switch, PC, and PlayStation 4.