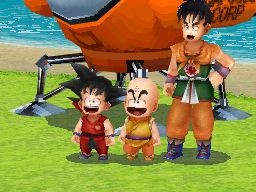 Once again, the original Dragon Ball epic is returning to the DS with Dragon Ball: Origins 2 from Namco Bandai. Players pick up roughly where Dragon Ball: Origins left off, only this time Goku is joined by his friends in his battles. The result is a game with a little more variety and the same impressive graphics.

Dragon Ball: Origins 2 takes place after the original Dragon Ball: Origins. The seven dragon balls have once again been scattered around the world. Goku is training on his own and searching for the four star dragon ball, which his grandfather had given him as a memento. From there, the game launches into the Red Ribbon Army saga from the series, as Goku and friends search for dragon balls to keep evil people from getting them again. Oddly enough, it does a lit of skipping, and picking and choosing. Mainly the Red Ribbon Army saga and Fortuneteller Baba sagas are covered, with a bit of the General Blue and Commander Red sagas in between.

When you first start Dragon Ball: Origins 2, you’re given quite a few control options. You can choose right away if you want to go with button controls, stylus controls or switch between the two as your leisure. Once you start playing through the first episode, you can choose to read brief tutorials, or just start running through Goku’s new adventures. 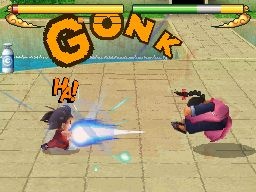 Gameplay should remind people of the Legend of Zelda games on the Nintendo DS. It’s an action-RPG-adventure, but there isn’t too much focus on the RPG part when you’re actually playing through episodes. There you’re mainly trying to find your way through the environment, beating up anything that moves as either Goku or one of his friends – Android 8, Arale, Bulma, Krillin and Yamcha.

There’s also a fun little extra called the Survival Tower. It’s essentially tons of boss battles where you keep playing to see how many you can get through and how strong you are. You can do so alone, or if you have friends nearby they can pick up and play as well.

For those who like to obsessively collect things, there’s something for you too. You can find "figures" as you play through the episodes. Once you collect them, you can trade with others, or see if you have enough to create a virtual diorama. Personally, the idea of getting to see little scenes wasn’t enough to motivate me to replay certain missions, but maybe it will be enough for others.

I also found Dragon Ball: Origins 2 to be more difficult than the original Dragon Ball: Origins. I needed to replay the first two episodes several times to boost Goku’s health before I was finally able to defeat the final boss in Episode 1-2, Colonel Silver. Maybe it was because it’s been a while since I played an Origins game, but I prefer to think that the difficulty was hiked up.

Oddly enough, Dragon Ball: Origins 2 really only has two failings. The first is the text size. In the menus particularly, the text is extraordinarily small. It’s almost like you’d need a DSi XL to make it look normal. This tends to be a common ailment among Namco Bandai’s Dragon Ball DS games, as Dragon Ball Z: Attack of the Saiyans was the same way. Fortunately, the in-game dialogue text that occurs during the episodes, is normal sized. 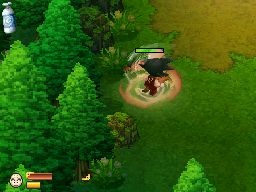 The second is that an interesting extra feature has been removed from Dragon Ball: Origins 2 North American release – Dragon Ball: Shenron no Nazo. The Japan version included the old NES game as an extra feature. The US version does not, despite the fact that Bandai released the NES game in the here in 1988 as Dragon Power. It’s a relatively minor thing, and if you didn’t know it was supposed to be there, it’s no big deal. But if you did know, (and now you do!)then it makes you feel a little left out knowing that Namco Bandai didn’t include it in this release. It’s understandable, since Dragon Power had Dragon Ball references removed.