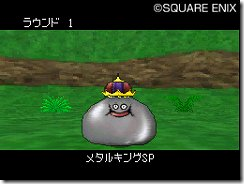 Video game sales in North America were slow in April, but Square Enix has nothing to worry about. In Japan, where Dragon Quest Monsters Joker 2 launched business is booming.

One million units of the Dragon Quest monster scouting spinoff were sold since the game’s launch on April 28. Dragon Quest Monsters Joker 2 features wireless battles over Nintendo Wi-Fi, giant monsters, and Metal King. If you’re in Japan you can get the extra monster by visiting a DS Station kiosk between May 20 and June 9.

Square Enix has not announced plans to release Dragon Quest Monsters Joker 2 overseas at this time. However, this is a hot seller and that ought to make Square Enix at least think about it. Plus, there is that whole worldwide tournament feature that’s underused since the game is only available in Japan.