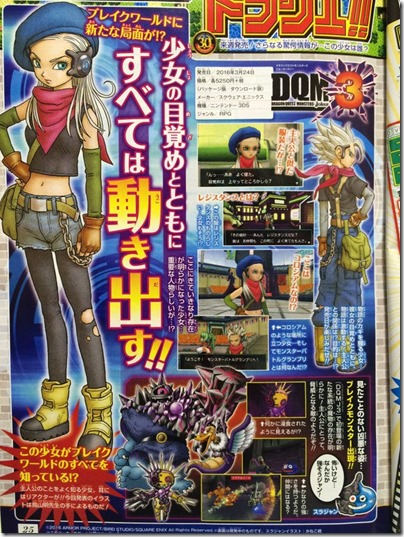 Square Enix revealed the latest on Dragon Quest Monsters Joker 3 with an interesting new character introduced in this week’s issue of Jump magazine. [Thanks, @Kazu4281.]

Dragon Quest Monsters Joker 3 protagonist has no recollection of his past, so he’ll need to work his way around Break World to figure things out bits at a time. Things will surely get interesting when he meets this mysterious female character.

As you may have noticed from her appearance, she’s dressed very similarly to the protagonist, and is also sporting a Reactor on her head. They say that their clothing is that of the “Resistance” but we don’t know much about this organization.

In any case, she, too, is from Resistance, and knows a lot about the protagonist and basically everything about Break World. You’ll meet her in an area that looks like a coliseum, and they also mention something called the “Monster Grand Prix.”

While much remains a mystery about her, including her name, she’ll play a key role in the story of the game, and maybe even in getting back the protagonist’s memories.

Dragon Quest Monsters Joker 3 will release in Japan on March 24, 2016 for Nintendo 3DS. You can check our previous report for a look at the game’s latest trailer highlighting some of its main features, and it even shows us a glimpse of these new Break Monsters.