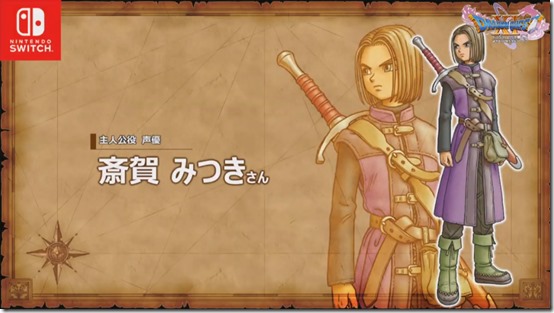 Dragon Quest XI S got its first livestream this week, focusing on revealing the voice cast for the Switch version, as well as some info on extra information at the very end.

The theme of the livestream was the letter “S”, and what it means for Dragon Quest XI S. The “S” not only stands for “Switch”, but also “Speaking”. Without further ado, here are the voice actors and voice actresses announced during the stream for the game:

Currently, the voice cast for the rest of the enemy faction major characters have yet to be revealed, including that for the final boss.

Finally, near the end of the livestream, Yuji Horii mentioned that there is another meaning to the letter “S” – Scenario. Dragon Quest XI S will have extra story scenarios compared to the PS4 version, but it will not take place after the ending.

Check out the full livestream below:

Dragon Quest XI S releases for Nintendo Switch in Japan in 2019. The next broadcast will be streamed around March.