I don’t know how they fit into the Etrian Odyssey mythology, but the conveyer belt-like “adventurer movers” are the best invention in Etrian Odyssey III: The Drowned City. 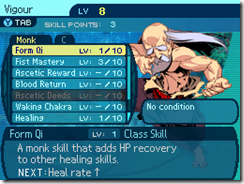 Before you can place magical arrows that let you glide through a dungeon, you have to create a party. Here’s where Etrian Odyssey III differs from the other games in the series. Atlus changed the classes around so you they can fit different, sometimes dual, roles. The Prince is kind of like a hybrid of the Troubadour from Etrain Odyssey II and a fighter, for example. This fellow can equip strong swords and armor, but has skills that boost the party instead of dealing damage. He (she if you make a Princess) can add elemental attributes, change the turn order with Knighthood, and restore the party’s HP after each step. The Prince’s most useful skill has a twist, it encourages players to keep him protected. Royal Veil, an ability that can be learned at the beginning of the game, recovers HP for all allies if the Prince’s HP is full at the end of a turn. So, should you move the Prince in the front, leaving him vulnerable to attacks, but in a position to deal damage or hide him in your back row?

When I first started Etrian Odyssey III I treated the Prince more like a buffer than a fighter. I also thought of my Buccaneer as a swashbuckler rather than a support character. The Buccaneer has a skill where he can chase an ally’s slash, blow, or thrust with one of his own attacks. Ideally, you want most of your party to use the same attack type to increase the effectiveness of the Buccaneer’s chase attack. Farmers are another interesting addition to the series. Aside from giving your party an EXP point boost, they aren’t very useful in battle. Farmers shine on the field with abilities that make time pass, harvesting easier, and prevent trap damage. These humble explorers can even revive party members by slapping them. 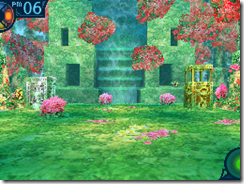 Etrian Odyssey III also lets players assign some of the most powerful techniques, limit skills. You can protect a Zodiac, an elemental magic user, with a skill that keeps him alive and select characters to do a team attacks. Party members become even more versatile when you get sub-classes. These allow you to supplement characters with skills like Bushin from the Ninja, an ability that lets you create a shadow clone, or equip few of those famer abilities to make a warriors who also knows a thing or two about gardening. Skill points are still sparse so it might be a good idea to plan your party before entering the Yggdrassil Labyrinth.

Inside town players can get quests from the Butterfly Bistro and missions from Via Senatus. The first task is to map out the forest entrance. If you haven’t played an Etrian Odyssey game before this is where you’ll learn to use the mapmaker. Etrian Odyssey III has drag-and-drop tools to color swampy spots, label locked doors, and marking shortcuts. Arrows, which you can place on tiles, create those magical conveyor belts I mentioned at the beginning. 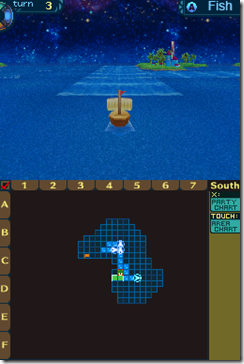 The first loop I made was a simple square that way I wouldn’t have to walk in a circle to find monsters. As soon as I was on the track I pressed play and waited for a fight. I suppose you could turn on auto battle too for fast experience point boosts, but maybe not at the beginning. Even weak enemies, like slimy frogs, can defeat your party. I tend to over prepare before exploring lower levels, so I took my monster searching time as an opportunity to create a walkway from the first floor staircase to the second second. Since town warps only appear every four floors players will visit the same floors often, another reason why its probably worthwhile to make a walkway.

Etrian Odyssey III lets players leave the labyrinth and explore the ocean. After paying a fee, players get a set number of turns to travel. Supply upgrades let you sail further, but the sailing game is more like a puzzle-board game than a dungeon. You have to figure out how to utilize the currents to move less and how to get around obstacles. Out in the ocean, you can fish, which is a really good source of income to fund Yggdrasil runs.

So why is your party exploring the Yggdrasil Labyrinth? Aside from being natural adventurers, fetch quests. Those “bring me that monster drop” requests get players back into the dungeon, but don’t really explain the plot, which is sort of about competing requests… Etrian Odyssey III’s story takes a backseat to the gameplay, the old-school Wizardry gameplay, but with a touchscreen map. The reason I pressed forward was to slay FOEs, those are the ferocious, occasionally annoying, monsters that chase and often kill your entire team if they catch you. They’re tough enough that beating each FOE for the first time felt like an achievement, not a paltry 20 Gamerscore point achievement, a triumph.