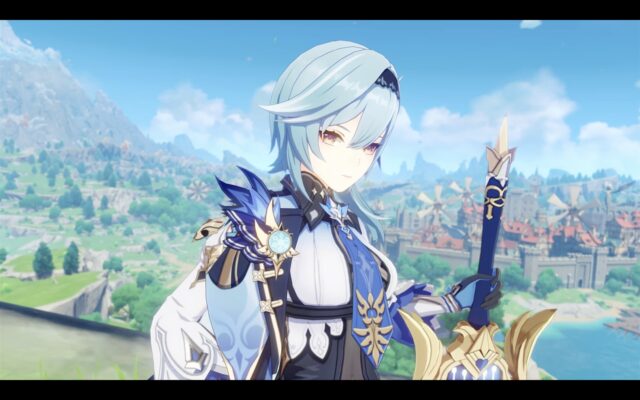 A new Genshin Impact EP music video is out, and this time its songs all pertain to Eula. This also means that she’s the star of it. In it, people can listen to three songs connected to her and both the Mondstadt and Dragonspine regions. Amber also has a brief cameo appearance.

Things begin with “Wayfarer’s Peace” in Mondstadt. People can see Eula overlooking the city. During “The Horizon,” Eula starts out alone. However, by the end of that song she is walking with Amber. Finally, “Moonlike Smile” takes us to Dragonspine. There, she’s posed alongside some Puffy Snowmen.

It isn’t uncommon for the Genshin Impact music videos for EPs to include certain characters and involve songs related to them. For example, Lingering Aroma of the Solitary Butterfly starred Hu Tao. Childe appeared in He Who Wanders Untrammeled.

As for Eula, people have a chance to see more of her in Genshin Impact. Her rerun banner is available until December 14, 2021. (The Albedo rerun banner is around too.) She’s also a part of the Shadows Amidst Snowstorms event. MiHoYo kicked off a sticker contest involving her too.

Genshin Impact is available for the PS4, PS5, PC, and both Android and Apple iOS devices. It will also appear on the Nintendo Switch.