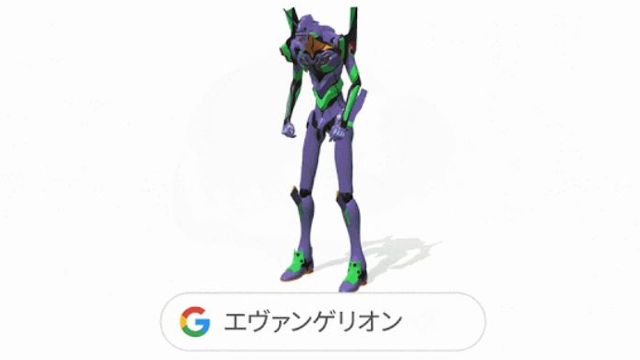 Google has added AR models of characters and units from popular Japanese franchises like Evangelion, Gundam, Pac-Man, and Ultraman. These models can be viewed anywhere worldwide by simply searching on Google. [Thanks, Game Watch!]

To access these AR models, users of devices with Android 7 or newer simply need to search for the eligible character or unit in a browser or with the Google app. The Google page will then show the model with a “View in 3D” prompt. Choosing “View in your space” will boot up the AR camera that projects the model in real life. Those who use iOS 11 or newer devices can also access the AR models by installing the Google app or searching on Google.com via Safari or Chrome.

A total of 14 characters and units from famous Japanese franchises were added to Google AR with this announcement:

The Gundam mobile suits were specifically chosen in anticipation of upcoming movie adaptation for Mobile Suit Gundam: Hathaway’s Flash. Google also worked with Bandai Namco to include Pac-Man and mascots of the rhythm game series Taiko no Tatsujin. The last four characters, including Hello Kitty, are popular Japanese characters owned by Sanrio.

Google Japan also published a trailer showing Pac-Man eat a circle of pellets in AR while being chased by his enemy ghosts:

The 3D models of characters and units from Evangelion, Gundam, Ultraman, Bandai Namco, and Sanrio are immediately available to view through Google AR on mobile devices with a minimum OS of Android 7 or iOS 11.