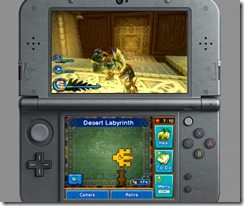 A new feature in Ever Oasis was shown off during Nintendo’s E3 2017 live stream. Players will be able to visit Hieroglyph Labyrinths. These are randomly generated dungeons created by placing slabs collected on a pedestal.

The type of slabs you place will determine the difficulty of the ensuing challenge. For example, placing gold slabs will make a the ensuing labyrinth much harder. This allows you to scale things to meet your level. Even if you place the same slabs twice in a row, you will get a unique areas at the same difficulty level.

Each of Ever Oasis’ Hieroglyph Labyrinths has different kinds of rooms, a mini-boss, and a boss. Rooms are preceded by color-coded doors, but the colors will mean something different in each dungeon. So in one, a red door could lead to a Treasure Room. Inside, you’ll find one chest with treasure and one with a monster inside that will cause the real treasure chest to disappear. A green door could lead to a room filled with monsters that are continually generated until you stop the process. A blue door may lead to a puzzle room with various switches that must be pressed to proceed. In another dungeon, blue could lead to a monster room and green to a treasure room.

There are also moments of respite in a Hieroglyph Labyrinth. Heal Spots are places that allow you to completely restore the party. They are one-time use locations that cure any ailments and refill the entire party’s health. Exit Spots are points that let you leave a dungeon while keeping all of the items you may have collected prior to that point. It is also possible to choose a Retire option to leave the randomized dungeon at any time, but you will not keep any of the things you collected during that run if you do.

The Hieroglyph Labyrinth gives rewards that can not be found anywhere else in the game. In the example provided in the Nintendo E3 presentation, the party received a Fairy Clothes recipe for defeating the boss and totally completing the random dungeon.

Ever Oasis will come to the Nintendo 3DS on June 23, 2017. The demo will be available in the eShop starting today.