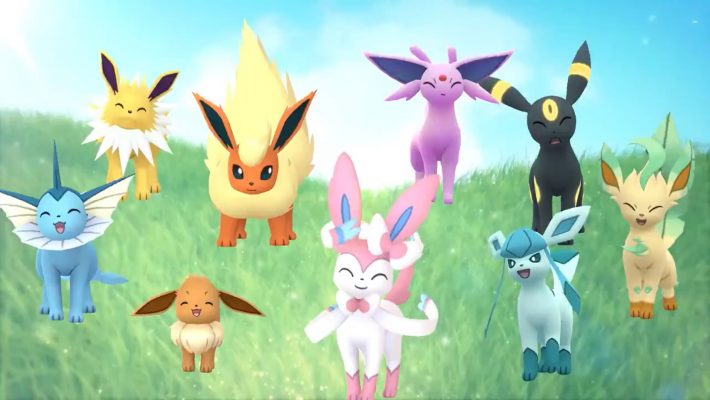 The final Eeveelution will finally appear in Pokemon GO, as the Sylveon debut’s been dated. On May 25, 2021, it will show up in the second part of the Luminous Legends Y event. People will be able to evolve Eevee into Sylveon in Pokemon GO for the first time. There will also be other Eevee-related opportunities and new items.

First, Niantic went over how to evolve an Eevee into Sylveon in Pokemon GO. As with Espeon and Umbreon, two other Eeveelutions that involve friendship levels, you’ll have to set the character as your buddy. However, instead of only walking with it, other heart-raising activities like taking pictures, playing, and feeding berries will help. There will also Eevees in 7km eggs, Eevees more often in the wild, other evolved forms in Raids, Eevee Field Research Tasks, and a Sylveon avatar hoodie.

Here’s the video showing Sylveon in Pokemon GO for the first time.

Sylveon, the Intertwining Pokémon, is making its Pokémon GO debut during the upcoming Luminous Legends Y event! You’ll be able to evolve your own Eevee into Sylveon by earning hearts when it’s your buddy. pic.twitter.com/smsfzTAA38

As for other new Pokemon GO additions, some other characters will appear more often during Luminous Legends Y. Yveltal will show up in Raids and Pancham in Strange Eggs starting on May 18, 2021. Galarian Zigzagoons will show up via AR Mapping, Field Research Tasks, and Timed Research tasks.

Pokemon GO is available for Android and Apple iOS devices. The Luminous Legends Y event’s first part runs May 18-24, 2021, and the second runs May 25-31, 2021. Once the second part begins, people will always have the option to evolve Eevee into Sylveon in Pokemon GO. The last additions brought in characters like Goomy and Xerneas.