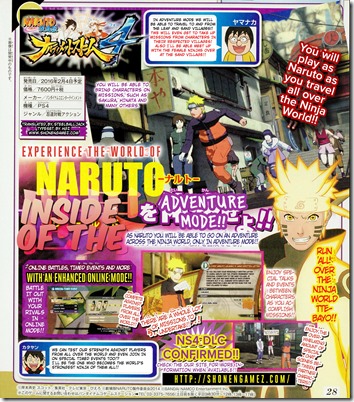 Bandai Namco shared the latest on Naruto Shippuden: Ultimate Ninja Storm 4 with details on the game’s “Adventure Mode” in this week’s issue of Jump magazine. [Thanks, ShonenGameZ.]

As shown in the scan, the “Adventure Mode” will let you “explore the world,” by being able to travel between the HIdden Leaf and Hidden Sand villages. You’ll likely be able to travel to other villages, too.

While walking around as Naruto, you’ll be able to switch your squad members around, and as you complete the missions you’ll get to unlock special events and skits with them, similar to how the Tales games work.

Naruto Shippuden: Ultimate Ninja Storm 4 will release on February 4th in Japan, February 5th in Europe, and February 9th, 2016 in North America for the PC, PlayStation 4, and Xbox One.