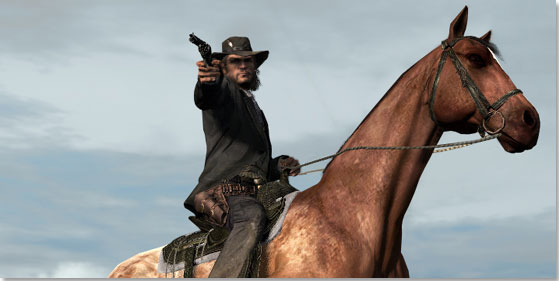 Embarrassing gaming moments. We’ve all had them. You know, like those times you fired a green shell in Mario Kart, only to drive straight into it moments later. This week in Facebook Files, we’re honouring our most embarrassing experiences while playing games, whether they’re ingame or out in the real world.

The other day, I decided to crack open Read Dead Redemption and give it a go. I was really enjoying the game, if not still getting use to the control setup and game mechanics.

So I decided to take a bounty mission. After riding my horse through the desert; I finally found my quarry. I deftly took out his henchmen, making short work of them with my pistol. All of a sudden, the mark runs; jumping onto a horse and galloping further into the desert. I whistle for my horse and give chase. After not being able to catch up to him, I opt for shooting his horse out from underneath him. I pull out my rifle and take aim, shooting the horse and sending the two of them tumbling. Now I decided to take him alive, so I run behind a rock to take cover so I can get closer to him and nab him. I am so sure of myself, this guy is going down. We exchange shots, and he manages to sneak around me, grab my horse and start running…. Having shot his horse dead, and being out in the desert, I am powerless to do anything but just sit there and watch as this mark rides off into the sunset; escaping on my very own horse.

Inspired by this embarrassing event, I thought I’d ask; what is the most embarrassing thing that’s happened to you in a game?

My most embarrassing moment? The only thing that comes to mind immediately was being stuck on King Bob-omb in Mario 64 the first time I played. I gave up trying to figure out how to kill him after a few hours because i was too stupid to realize I could pick him up… He looked too big, but Mario was apparently stronger than I had anticipated.

Aside from racing stuff, the other game that stands out in my mind is Resident Evil 4 on the Professional difficulty. This was at the very start of the castle chapter where you’re making your way up the stairs into the upper courtyard area with the catapults. There’s one of those guys wielding a giant scythe that’s patrolling inside a small room outside.

I figured I’d be smart and shoot him through the tiny window opening, but didn’t take the fact that he was wearing that metal helmet into account. Naturally, my shot bounced right off his head, and alerted him, making me feel like an ass. But it gets better! I then lie in wait as he runs toward me, figuring I’m going to let him run up close to me so I can shoot him point blank. Here he comes! Almost there…almost the–

Nope! Dude stops dead in his tracks and FLINGS his scythe all the way across the freaking courtyard and lops my head clean off. It was almost like watching it in slow-motion, with the scythe spinning through the air. Yea, I felt kind of silly after that. But then, that’s also why I love RE4 to death. It always manages to surprise you.

What’s your most embarrassing gaming moment? Fire away!