Since Fairy Fencer F an upcoming RPG from Compile Heart, it predictably has a battle system similar to that of Hyperdimension Neptunia. In battle, the triangle, circle, and square button are each assigned a skill, which you will perform in battle to execute a combo. 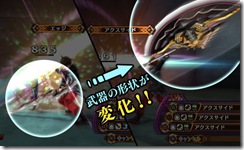 To fight, you must use ancient weapons called Furies, which are able to transform in the middle of a combo depending on the skills you use. For example, Fang’s Fury can start off as a sword, but it can instantly change into an axe or gun. Changing forms can bring out benefits such as increasing the number of hits you can execute, inflicting ailments, or dealing more damage in mid-air combos.

By viewing the menu screen, you can check the special traits of each skill, such as which ones can easily launch an enemy into the air, and which ones are effective against mid-air enemies. By organizing these skills together, you can execute devastating combos in combat.

Fairy Fencer F will be released on October 10 for the PlayStation 3.