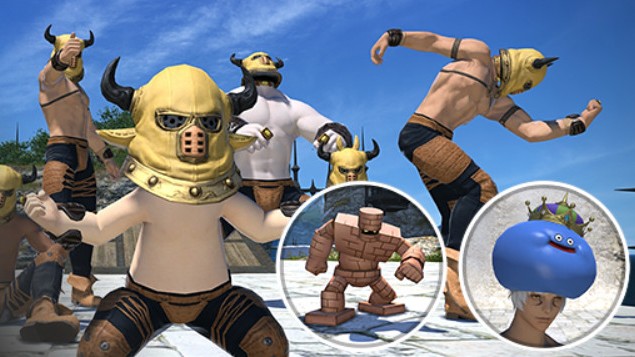 Dragon Quest is coming back to FFXIV, as the Letter from the Producer Live LXVI revealed the return of the Dragon Quest X event. On October 19, 2021, people will be able to earn cosmetic items inspired by Square Enix’s other JRPG series to wear in-game.

Here’s the tweet showing the event will be back in the game. It also included two screenshots that confirmed some of the returning items. In the image, the three major items from the July 2020 rerun of the event appear. People will be able to earn a King Slime Crown. This gives the character a hat that makes it look like a Dragon Quest King Slime is perched on their head. There will also be a Thug Mask. Multiple people wear it in the featured image. Finally, you will be able to acquire a Wind-Up Brickman Minion. This is inspired by the classic Golem monster featured in multiple Dragon Quest games.