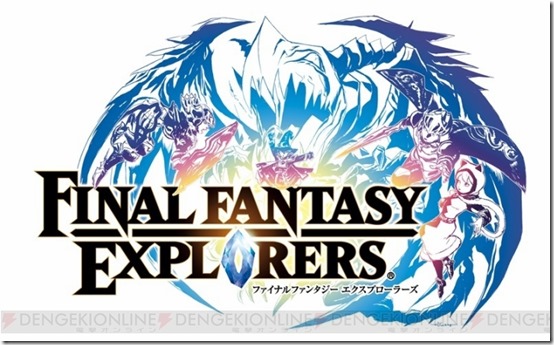 Being able to play as different Final Fantasy characters while recruiting monsters from the series is one of the most anticipated features of Final Fantasy Explorers. Director Atsushi Hashimoto recently shared details on those subjects and more, in a recent intervier with Dengeki Online.

Hashimoto starts the interview by sharing a little bit about how Final Fantasy Explorers started and the concept behind it. According to the director, it was simply from the though of “let’s make a Final Fantasy multiplayer action RPG”.

The idea of fighting against Summoned Beasts was something that was decided from the very start of development, as Hashimoto felt that it would be a cool feature to be able to fight against the Summoned Beasts that have existed throughout the series.

While on the subject of gameplay, Dengeki mentions that taking out a bunch of smaller enemies to charge up your Resonance Power looks like it might be a great way to gather material.

“About materials, I’m sure there are many people who gather enough and settle for what they get,” says Hashimoto. “However, these materials aren’t only used to make weapons, but they’re also very important for upgrading them. For this reason, those who want to enhance their favorite weapons should collect as much as possible.”

So, it sounds like Final Fantasy Explorers will have a weapon creation and upgrade system that will require you to always have material in order to do so, similar to the Monster Hunter series. Stronger weapons will also need rare materials as well.

Next, the director shares a little more about the Legend Characters feature, that allows you to transform into a Final Fantasy character for a short period of time.

According to Hashimoto, fans of the series might find the feature exciting, but adds that the game isn’t made only for those fans, but also for those who enjoy action RPGs. For that reason, players will get to choose whether they want to use that feature or not.

In order to transform into a Legend Character, you’ll need to find a specific item for them, and it will be possible to play through the entire game without ever transforming into one. Hashimoto says to think of it as just one option, while the other is about using powers from Summoned Beasts as part of the Trance System.

Another interesting feature is how you’ll also get to recruit monsters to fight by your side after acquiring their Spirit Stones and breeding them. Dengeki asks how will these monsters level up.

“As long as you take them with you in quests, they’ll continue to grow,” says Hashimoto. “The more the monsters participate, the more experience points they’ll gain. While details on this still remain a secret for now, I can say that it won’t simply just be about defeating monsters, and doing all kinds of actions will allow them to grow more steadily.”

After seeing footage of players fighting a Chocobo, Dengeki expressed their relief to know that you can also recruit them as well.

“By all means, you’ll get to recruit Chocobos to your party, so  you Chocobo fans out there, please feel at ease and enjoy the game,” responds Hashimoto. “Chocobos can also use Cure, so they’re actually pretty useful.”

He also says that single player mode can be pretty tough, so having monsters by your side will make things much easier and enjoyable.

Final Fantasy Explorers is slated for release in Japan on December 18, 2014 for Nintendo 3DS.