What was once a canned Wonderswan remake is now the most vastly upgraded Final Fantasy to date. Final Fantasy III (i.e. not Final Fantasy VI with Terra, Locke and Celes) was originally an impressive 8-bit Famicom game turns into a 3D showcase on the DS sixteen years later. While the graphics and control scheme have been updated, Final Fantasy III is still fairly the same game from the Famicom era. Does it stand the test of time? Find out in our playtest. 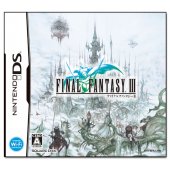 It’s the same game plus a more concrete story line. Final Fantasy III for the Famicom just threw four cloned Onion Kids down a hole where they were told by a crystal they were the warriors of light. Final Fantasy III for the DS actually gives the four characters names, personalities and genders. You start the game alone, as Luneth, an optimistic orphan from Uru. He falls down a hole and runs into goblins and has to battle a huge land turtle solo. When he finds the crystal, he is told to find three other light warriors to join his cause and bring balance back to the Earth. When he returns home, his timid friend Arc joins the quest and the two run into Refia, a strong willed mechanic who wants to save her town from Jin’s curse. With Cid’s airship they travel to Sassoon, which is also suffering from Jin’s curse and recruit Ignus a cool headed soldier. The only way to stop the curse is to find Princess Sara in the Cave of Seals and use her mythril bracelet to purify the land. The story gets deeper when it is discovered that all four of the heroes were originally orphans and that they are the chosen warriors of light.

Final Fantasy III is more of a traditional RPG than later entries of the series. Players are going to have to spend some time to level up their characters, perhaps not as much as on the Famicom game, but don’t expect to clear dungeons just by running into them head first. At the beginning of the game players only have access to the freelancer job which can use all weapons and both kinds of magic (white and black). While the freelancer can do everything it isn’t particularly good at anything, which encourages players to switch to real jobs after the Cave of Seals. The job system is more simplistic in Final Fantasy III than in FFV or any of the tactics games. When you get the crystal of wind you have access to the six basic jobs in Final Fantasy 1: Warrior, Monk, Thief, White Mage, Black Mage and Red Mage. Before battle begins you can switch freely into any of these jobs as you deem necessary for a fight. Maybe a party of four warriors is best to trek through a dungeon or maybe it is a good idea to blast away a boss with four black mages. There is a small catch, if you’re a warrior class and you switch to a mage class you won’t have any spells stocked. See Final Fantasy III follows the classic spell system before MP existed. Spells are broken into levels (1-8) and you are designated a certain number of casts for each level. As an entry level Black Mage you will get around ten casts of level one magic and a single cast of a level two spell. As you level up you will be able to cast higher level spells more times.

There are 23 jobs in Final Fantasy III to play as, but most of them are upgrades of existing classes. The White Wizard is a beefed up version of the White Mage and the Karataka is a Monk that adds in more hits. There are some interesting jobs in Final Fantasy III, like the Viking, a tank character with high HP and a new provoke command to send damage his way. There is also the Geomancer with terrain command, Dragoons and Scholars that can scan enemies for their weaknesses. Final Fantasy III was also the first game that brought in Summoners to the series. However, summon magic doesn’t play as big a role in FFIII as it does in other games. In fact summon magic is sort of frustrating since when you summon a monster it will do one of three attacks. Ifrit might cure your party or if you’re lucky cast his trademark hellfire spell. Bahamut could cast mega flare or maybe it will end up just being flare. You don’t have a fair choice in the matter. Even with all of these options Final Fantasy III is more on the basic side than the later FFs. It makes sense in the series timeline, but with all of the visual improvements some gamers might be surprised by this. One more thing to note about the battle system is the occasional “fifth” character to join your party. When you meet Princess Sara or Desch they randomly jump into battle to help out. Since it’s random you can’t count on it, but it can make fights easier when Princess Sara jumps in to cure the party.

That being said Final Fantasy III looks great in comparison to the Famicom game. The world has been changed from simple sprites to a 3D masterpiece on the DS. The graphics still have some jagged edges, but compared to other 3D titles on the DS Final Fantasy III looks a lot better than most of them. The camera is fixed from an overhead view, but players can hold the L trigger to zoom in. Zooming in restricts the width of vision, but it allows players to see signs of sparkling light, which opens up secret passages. Final Fantasy III also has an impressive full motion video sequence at the beginning of the game, which acts as an introduction to the world. Like other FF remakes Final Fantasy III uses the same music as the Famicom version, only this time the sound is richer than the original. A new addition to the series is touch screen control. Players can drag Luneth and his party around with the stylus and select battle commands with the touch screen. Since most of the gameplay happens on the bottom screen, the top screen is used mainly for the overworld map.

Another new feature exclusive to the DS version is MogNet, a system of Moogle Mail that is supposed to unlock extra dungeons. We’re going to reserve saying anything about this since we don’t have anyone to send mail with. (Anyone have a copy of FFIII and wants to send mail leave a comment here!). MogNet requires both players to be online at the same time so when we get a chance to play with it we’ll talk about that later.

After all the time spent with Final Fantasy III, it’s a game that classic RPG fans are going to love to death. However, it doesn’t have the depth that say VII or X has in the story or the complex character development in V. If you’re into RPGs, give Final Fantasy III a shot.

Since the game is in Japanese and Final Fantasy III requires talking to lots of different characters it doesn’t rank high on the import friendly scale. Also there is no furigana so you’ll have to know kanji as well as kana to get through the game.

Square-Enix plans to release the North American version on November 14, 2006.

+ Pros: Amazing graphics, the birth of the job system and many other series staples are key elements of Final Fantasy III.

– Cons: Compared to modern RPGs combat is on the simple side.

Overall: Final Fantasy III is an amazing visual step up from the Famicom game, but it keeps the simplistic gameplay from the NES era.