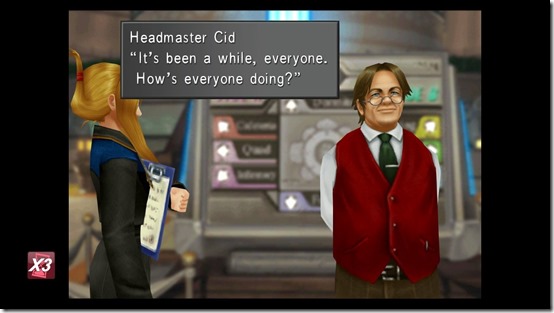 Final Fantasy VIII is an installment that some might consider divisive. There are fans who love how different it can be, while others might be concerned about the way it handles grinding for certain abilities and items or the course the story takes. While the narrative will never change, all versions of Final Fantasy VIII Remastered do the game a great service. Two of its “cheat” features remove what some might consider an inconvenience imposed by some mechanics, allowing people to more readily appreciate what the game has to offer.

One of the biggest changes in Final Fantasy VIII Remastered is how it handles magic. Rather than people innately knowing or learning spells, people who have junctioned a Guardian Force and equipped the Draw ability can pull magic from hotspots in the world or enemies. (These spells can then also be tied to certain stats to bolster them or used as usual.) This means that if you want to be prepared for an area, say for that very first boss fight against Ifrit before taking the SeeD exam, you first need to draw some Blizzard spells from the Buel in Ifrit’s cave or from the Fastitocalon-F around the beaches near Balamb Garden. Getting enough can take a long time. Except, when you turn on the 3x speed function and the Battle Assist feature, you can be done in minutes. With both enabled, getting a full 100 spells can be done incredibly quickly, without worrying about managing the foe or your health. Once you have gotten enough, you can turn off both features (or leave the 3x speed boost on, since it is a godsend for early encounters) and go about your business. 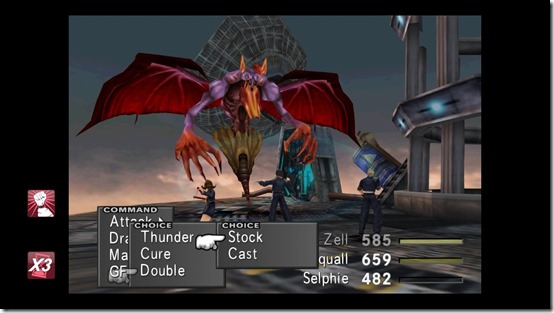 This is especially helpful when first getting your party together. Each person has their own stores of magic, which means you aren’t just getting 100 of a spell. You’re getting 600 of it. Also, certain spells are better for junctioning to specific stats, so you really want to take advantage of drawing them as quickly as possible, while you attempt to perhaps try and get certain cards so you can get better junctioning spells early like Death, Demi, Meltdown and Regen. So, say, enabling both of the assists while fighting Elvoret in Dollet would make it easy to effortlessly pick up the Siren GF and get enough Double spells for everyone, as Double is one of the best spells to junction to stats early on. Then, once you get to the point where your GFs have learned the various refine abilities, perhaps via this sort of method to farm AP to get abilities like T Mag-RF and Mid Mag-RF for Quezacotl, you can focus on getting the highest level spells for junctioning through refinement.

This is also great for people who want to get into the Triple Triad card game. Quezacotl has an ability called Card. Once learned, you can fight enemies and attempt to collect Triple Triad cards from them. Most enemies drop their own cards, but you can get cards from other characters as rare drops. (For example, a Funguar could drop Biggs and Wedge, while a Malboro could drop its own card or a Tonberry King one.) In the normal game, this process could get rather tedious. Especially with a Tonberry King card, which is rare and involves dealing with multiple Malboros or Fastitocalons.

Turning on both the 3x speed and Battle Assist is fantastic for this too. It allows you to take your time gradually whittling down the health of monsters whose cards you want, without having to worry about dying or the collection process taking forever. But, it also makes dealing with the more resilient or troublesome enemies that drop the better cards a lot less annoying. Plus, it ensures Quezacotl learns the Card ability faster, making it possible to more swiftly prepare yourself for matches. 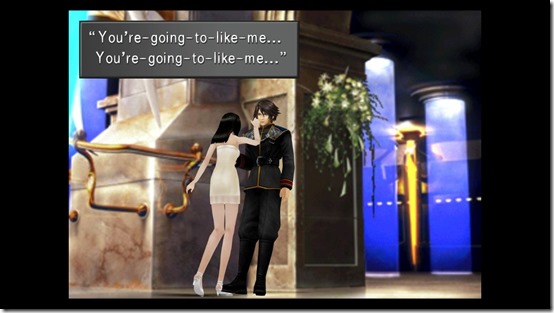 Even the ability to turn off battles can be great. This is because Final Fantasy VIII has a level-scaling system. Enemies’ levels are based on your party average level, to keep things competitive and avoid it feeling like you are struggling or overpowered in some areas. If you turn battles off, you can avoid the hassle of random encounters. But, it doesn’t negatively affect you, as boss battles also are scaled. (Though, there are a few areas in the game where enemy levels are predetermined, like a certain late-game island.)

Learning to accept drawing and card acquisition can take some time normally, but Final Fantasy VIII Remastered removes those barriers. It makes it easier to enjoy the parts of the game that might have otherwise frustrated people. Also, it is one of the few games where turning off random battles in the name of getting through a certain section easier or perhaps any other reason won’t come back to haunt you later on. The convenience features could really help improve the quality of life for some people.

Final Fantasy VIII Remastered is available for the Nintendo Switch, PlayStation 4, Xbox One, and PC.