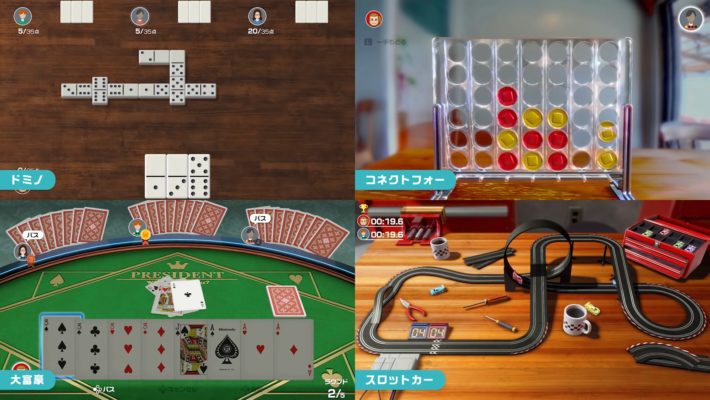 Back in May 2020, the UK product listing for Clubhouse Games: 51 Worldwide Classics tipped people off to the existence of a planned free application. This would be available in the eShop for Nintendo Switch owners who don’t have the game, but wanted to take part in some local multiplayer games with a person who does. Now, the Japanese announcement and trailer for Clubhouse Games: 51 Worldwide Classics Pocket Edition confirmed it will also give people four free games and launch on the same day as the full title. [Thanks, GoNintendo!]

The four free games included in the free Clubhouse Games: 51 Worldwide Classics application will be Dominos, Four-in-a-Row, the President card game, and the Slot Cars racing game. Each one has a single-player option. Brief previews of all four can be seen in the 30-second video.

As a reminder, this free app will allow people to access Mosaic Mode, which lets multiple Nintendo Switch systems be arranged on a tabletop surface for a game like Slot Car. (In that title, doing so lets you create a custom track.)

Clubhouse Games: 51 Worldwide Classics and its free Pocket Edition will both launch on June 5, 2020 worldwide. As the title suggests, it comes with 51 games and a multiplayer piano.