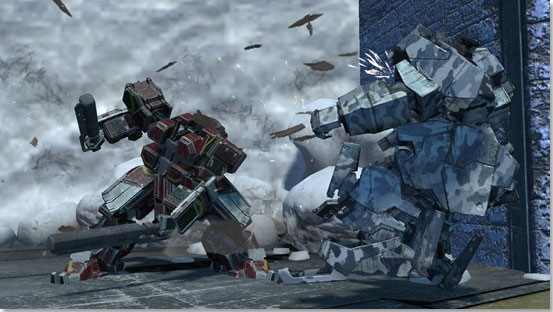 When we spoke to Front Mission Evolved producer, Shinji Hashimoto, at E3 and asked about his upcoming collaboration with Metal Gear Solid designer, Hideo Kojima, Hashimoto told us, “It’s a tiny surprise! We want to cross-promote our products. There is a little surprise; it’s small, but it’s coming.”

While the announcement did turn out to be a small surprise indeed — smaller than you’d expect, perhaps — you certainly can’t accuse Hashimoto-san of getting people’s hopes up.

Square, with Kojima signing autographs at their Comic-Con booth earlier this week, announced that Front Mission Evolved will allow you to decorate your Wanzers with decals from Metal Gear Solid: Peace Walker and other Metal Gear logos, such as the one from Fox Hound.

Odd that Square and Konami would limit this cross-promotion to merely decals and not including Metal Gears in themselves Front Mission.