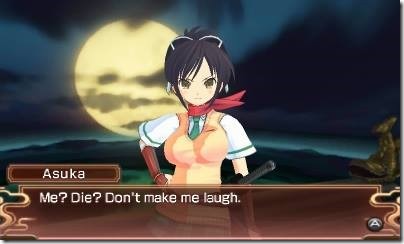 Recently, Xseed stated that Senran Kagura Burst, released via the Nintendo eShop for 3DS, has “sold well enough” for the publisher to consider localizing other games in the series. Additionally, Xseed have also said that they would be willing to consider a retail release for future Senran Kagura games, should they release them.

In reply to a Facebook user asking if it would be possible for Senran Kagura Burst to see a limited physical release, an Xseed representative stated, “Unfortunately, no. Once a title is released as digital-only, we really can’t go back and make a physical version. Good news is that if a digital-only title is successful enough, it greatly helps the chances of a future iteration of that series getting a physical release.”

In reply to another Facebook user, Xseed stated that they would also consider a physical release for the PlayStation Vita Kagura game, Senran Kagura Shinovi Versus, were they to publish that in North America.

“A physical release wouldn’t be out of the question for [Shinovi Versus] if we did it, but unfortunately it’s too late for us to go back and redo Burst,” Xseed said.

“For all the people that supported Burst with an eShop purchase, we really appreciate it. The ‘no package no buy’ reasoning really doesn’t work because in this case the eShop release could be considered almost a ‘proof of concept’ where we prove to the retailers (and ourselves) that there’s a market for this series, which in turn gives us much more clout when trying to convince retailers to stock a physical release in the future because we have hard eShop sales numbers to prove it can sell.”