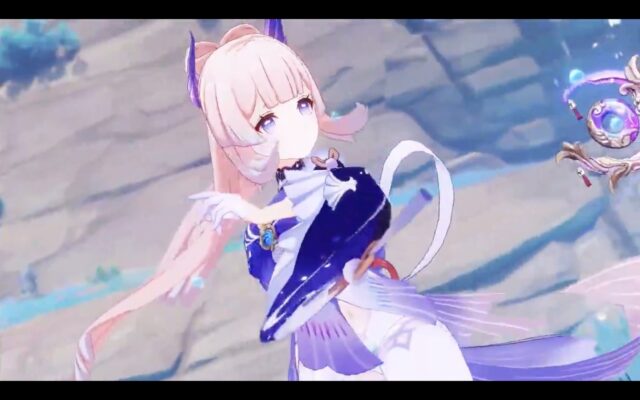 While the Genshin Impact 2.1 Twitch stream is running late, the trailer for the update is already live. The video goes over some of the additions we’ll see in the game. People like Signora, the Fatui Harbinger, show up as a foe. We also see some of the new playable characters who will appear when the update arrives. It seems Sara Kujou, Kokomi Sangonomiya, and the Raiden Shogun Baal will all appear after the Genshin Impact update on September 1, 2021.

The new characters all appear after Signora’s appearance. At the 1:15 mark, Sara shows up. She will be a four-star Electro archer. Her design is modeled after Tengu.

After showing her gameplay, we get to see Kokomi in Genshin Impact. Her segment starts right at about one minute and 30 seconds into the presentation. She will be a five-star Hydro character who uses catalysts. We get to see her use watery attacks alongside a fishy friend.

Finally, the last character shown in the Genshin Impact 2.1 trailer is the Raiden Shogun Baal. Like Kokomi, she will be a five-star character. She’s an Electro-type who wields a polearm.

As for the presentation, miHoYo confirmed it will start in a few minutes.

Due to technical problems, the special preview program scheduled at 09:00AM(UTC-4) on August 20, 2021 will be postponed to at 09:30 AM (UTC-4). Paimon would like to thank you for your patience and understanding. See you guys on the official Twitch Channel soon!