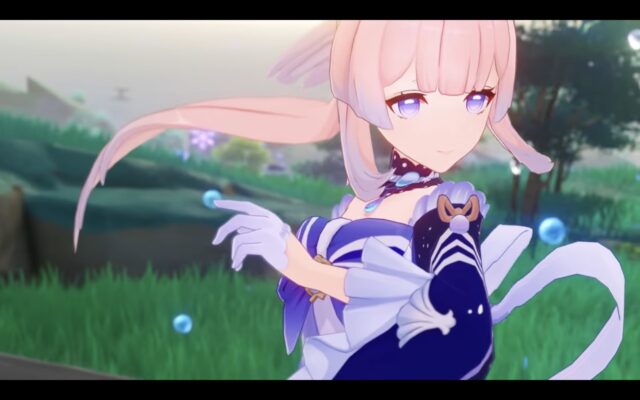 The latest Genshin Impact Collected Miscellany trailer is here, which means Yuri “Dainsleif” Lowenthal is here to introduce people to the skills Kokomi will use. She’s the new five-star Hydro character who uses catalysts and is leader of the Inazuma rebellion against the Vision Hunt Decree.

Essentially, Kokomi’s different skills in Genshin Impact are designed to help support the party. One example is her Princess of Watatsumi passive, which reduces swimming stamina costs by 20% so you can swim longer. She also sacrifices her own ability to deal critical hits to increase her healing effectiveness by 25% with Flawless Strategy.

Kokomi’s Elemental Skill and Burst in Genshin Impact are also beneficial to a party. When the Kurage’s Oath Elemental Skill is used, a bake-kurage jellyfish appears to heal allies and hurt enemies. Her Nereid’s Ascension Elemental Burst will cause Hydro damage to enemies. However, it also grants her a Ceremonial Garment that will restore HP to all allies whenever she uses a The Shape of Water normal or charged attack.

Genshin Impact is available for the PS4, PS5, PC, and both Android and Apple iOS devices. It will also come to the Nintendo Switch eventually. The Genshin Impact Kokomi banner will begin on September 21, 2021 and include Beidou, Rosaria, and Xingqiu.