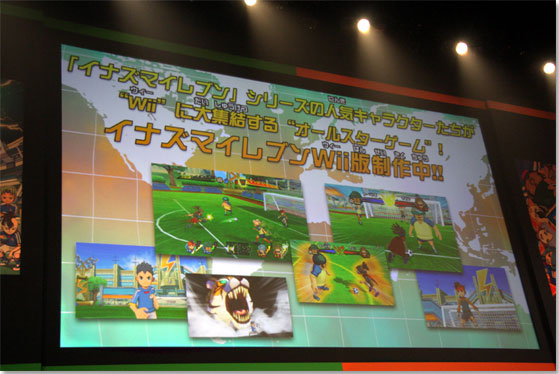 At an Inazuma event this weekend, Level-5 president, Akihiro Hino, outlined plans for the popular football RPG series in Japan. After speaking to the audience about the upcoming Inazuma Eleven 3, Hino switched gears to discuss new games.

First, for everyone anxious for news of Inazuma Eleven Break (name not final), the first console Inazuma Eleven game, Hino confirmed the game for Wii and mentioned that it is still in development. No release date was specified, however. A slide says it will be an all-star game featuring popular characters.

He then revealed that Level-5 are releasing a mobile phone application, titled Inazuma Eleven Mobile, which allows you to unlock characters in Inazuma 3. Following this, was news of an Inazuma Eleven anime movie, and a promotional trailer for Danball Senki. Upon the trailer’s conclusion, Hino assured the audience that Danbol wasn’t a replacement for Inazuma, and made a quick mention of a “season 4” for Inazuma Eleven without specifying a platform.