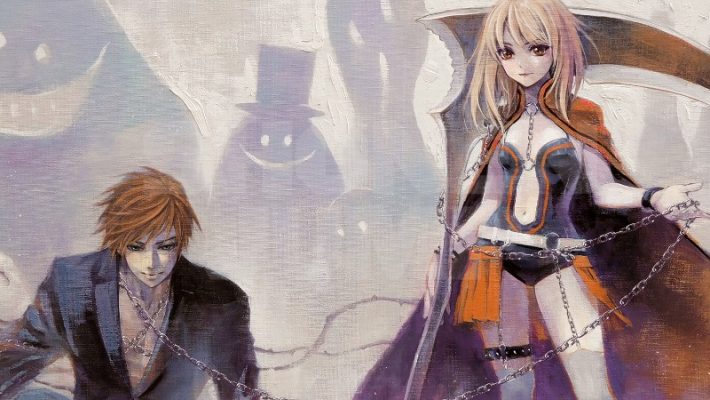 We’ve seen horror takes on the magical girl concept before. Puella Magi Madoka Magica and its offshoots are good examples. Now Ghost Reaper Girl, a Shonen Jump manga from Rosario + Vampire creator Akihisa Ikeda under the name Akissa Saiké, feels like a similar sort of exploration of the concept. Except this time, the contract involves ghosts and acquiring powers is tied to possession.

Ghost Reaper Girl’s name comes from a campy, low-budget, in-game show. Chloe Love is a woman who grew up starving and desperate. Her dream has always been to lead a “shining life.” In an attempt to do so, she’s been trying to make her way as an actress. It isn’t going well. Aside from the one horror show, she’s only had bit parts. However, while at an interview for a new role, she discovers another talent. Her body is apparently a perfect fit to be possessed by any spirit. The innate power of her soul makes her incredibly appealing to all ghosts as a result.

It comes at a bad time! There was essentially a spiritual jailbreak, and the human world is infested. Fortunately, an Arkham Bullet agent named Kai Izod is around right as she’s being chased and attacked by the ghost inside the producer who was interviewing her. Kai, coincidentally enough, knew of her from the show. He explains that by making a contract and working together, she’ll be safe and he’ll get the human body necessary to deal with ghosts possessing people and causing damage in the real world. There’s even a reference to Madoka when this comes up!

This is when Ghost Reaper Girl gets interesting. Chloe’s master and servant relationship with Kai results in a magical girl-like transformation. Her appearance changes. She gets a new outfit. Her abilities are enhanced. Kai even becomes both a weapon and a mascot character. He turns into the scythe she wields. (He even gets comically large eyes and a smile.) Chloe does good in this form! She sends spirits back to Hades! Kai says she could even become famous and rich!

What makes it stand out is that Ghost Reaper Girl doesn’t shy away from horror. In its first chapters, we see all sorts of body horror. The spirits possessing people manifest from their mouths in terrifying ways. We also see them attempt to take Chloe’s body by force. When she encounters another hostile spirit, the person doesn’t hesitate to get violent with Chloe and Kai. Attacks involve ripping into people and actual damage. It even feels like death is a possible consequence for folks.

It all ties together very well in the first volume of Ghost Reaper Girl. Chloe is an established woman accustomed to survival. We get to see an unusual means of power acquisition, one which normally goes in different directions in horror stories. It doesn’t shy away from violence. But there is still the sense of levity that comes from a sort of “monster of the week” formula that’s teased a bit in its initial chapters. I feel like there’s a lot of potential for it to go some interesting places.

The first volume of Ghost Reaper Girl volume 1 will be available in English from Viz Media on June 7, 2022.