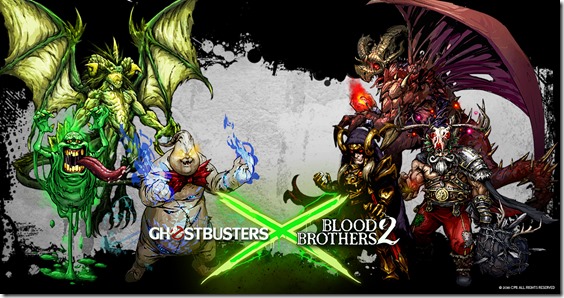 Players who wish to recruit and train Ghostbusters characters like Slimer, Egon, and the Stay Puft Marshmallow Man for their armies in strategy RPG Blood Brothers 2 can do so now through a pair of in-game events.

The in-game events have been kicked off by Galbraith escaping from the Netherworld, releasing a torrent of undead forces upon Arnashia. To make his army even stronger, he’s recruited spirits from the world of Ghostbusters.

The first event, which is happening now, offers Mayhem, Slimer, and Rowan, with the second event offering Egon, Vigo, and the Stay Puft Marshmallow Man when it starts July 28. These characters will become permanent members of the player’s roster should they be recruited during the event, and can evolve and grow over play.

Blood Brothers 2 is a free-to-play mobile RPG, available on iOS and Android. In it, players can evolve and train various types of monsters and warriors, creating an ever-growing army of forces as they battle through a story of loyalty and betrayal.