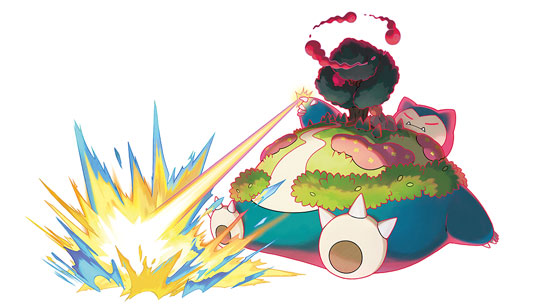 The next Pokemon Sword and Shield Gigantamax Raid appearance has been revealed. Beginning on December 4, 2019, Snorlax will start showing up with his new form. People will have a chance to find and participate in Gigantamax Snorlax Raids in the Wild Area until early January 2020. If you connect to the internet with Y-Comms or go to Mystery Gift and select Get the Wild Area News, you’ll have your opportunity to bring this big buddy home.

The Gigantamax Snorlax is a normal type that could have the Immunity or Thick Fat ability. Its G-Max move turns Normal attacks into G-Max Replenish. This deals damage and restores any berries other Pokemon on your team may have eaten during the battle, giving them more food.

Here are the official descriptions for Gigantamax Snorlax from the Pokemon Sword and Shield website.

It’s grown huge—as have the leftovers of its meals

The Berry seeds and small rocks that were tangled in its belly fur have undergone explosive growth thanks to the power of Gigantamaxing. With a tree sprouting upon its belly, this gigantic form of Snorlax has the majesty of a great mountain.

Whether because of the great weight of its stomach or its unchanged natural disposition, this Gigantamax Pokémon almost never moves. When the time comes to do battle, it lifts its upper body by just a tiny amount and attacks by flailing with its arms and legs. At first glance, you might think it’s not very serious about battling—but these actions pack a tremendous punch. In fact, Gigantamax Snorlax is said to be one of the strongest Dynamax Pokémon discovered.

Pokemon Sword and Shield are available for the Nintendo Switch. It has so far sold over six million copies worldwide, with over 1.36 million sold in the first three days in Japan.