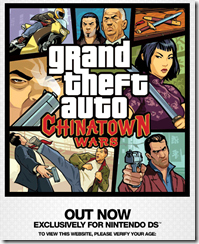 Take Two Interactive claims “this version of Grand Theft Auto: Chinatown Wars will take full advantage of the power of the PSP system.” Details about how the PSP release will handle touch screen controlled items like the hot wiring mini-game were not announced.

Rockstar will release Chinatown Wars as a retail game and a downloadable game on the PlayStation Store this fall.