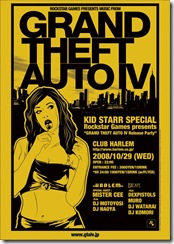 Grand Theft Auto IV is old news for us. We’re done with the game looking forward to zombie wars. Japan is one of the few places in the world that doesn’t have the game yet. Capcom is going to publish it next week and it’s not getting a typical meet the creators launch in Akihabara. That’s not GTA hip. Grand Theft Auto IV’s release party will take place in Club Harlem in the trendy Shibuya district of Tokyo on October 29. Party goers will be able to hear music from the game and drink in the presence of special guest Mister Cee. Mister Cee? Isn’t he a DJ from Hot 97 in New York? They flew him halfway around the world for this?

This isn’t the only Grand Theft Auto IV promotion going on next week. Capcom and Microsoft are linking up to give away briefcases of swag that includes a GTA IV dart board, pool stick, and a “Statute of Happiness”. The Grand Theft Auto games have typically sold decently in Japan, but never got a launch this big.