There are plenty of quality titles on the Xbox 360, but few are exclusive games are geared towards children. Viva Piñata aims to change this, but even with its colorful characters Viva Piñata is a game anyone can enjoy. You start out with a barren garden and a masked girl named Leafos wandering in it. The girl is in tears as the plot of land has turned into a wasteland unlike the rest of Pinata Island. With her help you’re going to revitalize the land to a home for piñatas of all shapes and sizes. 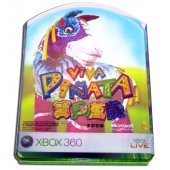 Since the area is dead land you spend your first minutes of Viva Piñata clearing away the debris with your shovel. You can smack rocks and pound dirt to make soil. Once the field is clear you can plant grass over it and piñatas will start to wander in. The first piñata you’re going to see is a whirlm, an orange worm piñata whose only requirement to become a resident is to have grass on your garden. Outside of your garden there are plenty more piñatas waiting to make a home on your garden, like the whirlm, but you have to make it hospitable for them. One of the early ways of doing this is to grow different plants on your garden. Another masked fellow called Seedos will approach your garden throughout the day. If you chat with him he drops a seed, which you can plant. Seeds need to be watered to fully grow into a tasty vegetable or a giant tree. As you tip your water can a little meter appears telling you how much water the plant needs to grow. Too much or too little water will kill it so players have to keep the amount of water somewhere in the middle. Once you get a turnip you will be able to attract mousemellow who will be happy to feast on your hard work.

Here is where things get tricky, while your mousemellow is a happy resident, it is also a meal for a syrupent, snake piñata. Unlike Animal Crossing or Pokemon you can’t get too attached to the piñatas you care for. Each one you grow can be sold to build a new piñata house or act as food to spark a romance between two piñatas. You’re constantly moving up the piñata evolutionary chain and the only way to do this is to sacrifice some of the piñatas you have, which is sort of counterintuitive to the whole customization system built in Viva Piñata. You can buy accessories like hats for your favorite piñata or feed it colored food to change its color. There are even accessories available for online purchase, but until you get far in the game your piñata is more likely to be dinner than be around long enough enjoy its new nose ring. If you really want to protect your piñatas you can fence in predators.

To make sure you have a steady supply of piñata food you need to romance piñatas. When romanced piñatas do a dance to make offspring and provide a steady stream of income. However, most piñatas aren’t in the mood for love, you have to help them with the process. Sometimes they need to have a meal, sparrowmint piñatas need to eat one of your whirlms before they can romance. Thankfully once you have enough grass and house whirlms can romance at any time, which makes them the staple piñata for a long time. After two piñatas are prepared for love you can direct them to meet each other and start the magic. Now you need to move a piñata through a maze to meet another piñata. Since the mazes are always the same doing them over and over is the most repetitive part of the game. In fact after romancing thirty or so worms you’re going to be sick of doing the same winding s-maze, but since romancing piñatas is integral to the game you’re going to have to keep doing the same mazes.

While most piñatas are friendly there are sour piñatas that cause problems. Indicated by dark red and black stripes sours eat your seeds and start fights with your beloved piñatas. You can whack a sour with a shovel to eliminate them or if you’re skilled you can convert them into a resident. Sours aren’t the only problem, weeds pop up in the garden and as your population grows piñatas will start to fighting with each other. Most piñatas are docile, but once you get pretztails (foxes) be prepared for combat. Pinatas attack each other from a distance by throwing tires and magical stars so you can easily see a rumble taking place. Your best way of stopping a fight is to poke a piñata with your shovel, but that doesn’t always work. Later in the game fences are necessary when you have piñatas that are natural enemies like Barkbark (dog) and Kittyfloss (cat) piñatas in the same garden. If you don’t stop a fight in time your piñata can get ill. A doctor is on call 24/7, but to heal a piñata it costs precious chocolate coins, which are better spent on expanding your garden. Sooner or later your garden is going to be too big to manage yourself. The best way to keep growing your garden is to hire temporary helpers to water plants and sell vegetables for you.

While Viva Piñata is for children there is a creepy aspect to the game. It’s not violent, but watching a piñata eat the candy that pops out after they attack it is sort of disturbing. Also since Viva Piñata is designed for a younger audience Microsoft deliberately reduced the amount of online play in the game. You can’t swing by a friend’s garden, the main thing you can do is send packages to each other. Packages can be filled with other piñatas and gifts. Trading and buying accessories over Live isn’t much to look forward to for online play compared to what Viva Piñata could have been.

Fortunately, Viva Piñata is deep enough that you won’t have to go online to search for more action. Your garden is constantly growing and the bigger it gets the more complex the game becomes. Viva Piñata begins slowly with confusing controls and way too many menus. However, Viva Piñata is one of the rare games that is more fun as you spend more time with it. Instead of catering to the same audience who wants the next Halo, Viva Piñata has the potential to pull in a new audience who enjoy games like Harvest Moon and Animal Crossing.