The back of the box claims, "a gaming legend delivers his puzzle masterpiece!"  So just who is this gaming legend?  He’s Yokoi Gunpei, the creator of the game. (What? Still haven’t heard of him? Maybe you’ve heard of his baby named Gameboy.) A quick rundown of the game goes like this:  there are tiles with different types of lines on them and the player must move the tiles to make one continuous line flowing from left to right to remove those tiles before they build up to the top of the screen.  For a more detailed explanation, check out the Gunpey PSP review. 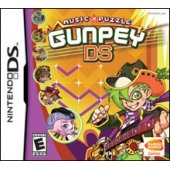 Unlike its PSP counterpart, Gunpey DS is less about zoning out to trance music, and more about loud colors and nonsensical characters.  I still haven’t figured out if there’s supposed to be a story connecting all of the characters in Frontier Mode (the game’s version of Story Mode), but it doesn’t matter because we’re only here for the puzzles, right?  The game gives the option of playing Gunpey in break or original mode. In break mode, eliminated tiles leave an empty space where tiles above can fall down on.  Original mode replaces the empty space with empty tiles.  I would suggest break mode if you’re new to the game.

I came into the game with a misconception that gameplay would be fast because of how simple the game was.  It gets boring unless you take time set up more complex lines in order to get the bonus attacks (locking the enemy’s touchscreen, scrambling their tiles, blocking half their screen) in Frontier or versus mode.  Before I realized that the key to winning was eliminating as many tiles as possible in one “Gunpey,” I was pretty bored with the game.  Now that I know better, gameplay is more hectic because there’s a delicate balance between connecting as many tiles as I can and not having my tiles overflow to the top of the screen.

It’s true that the DS version has a different style of music than the PSP version, but that’s not necessarily a bad thing.  The music on Gunpey DS more whimsical than trancey. The game does a decent job of matching up sound effects for getting a Gunpey with the music of the current stage.  While I wouldn’t go as far as saying that you feel like you’re playing a musical instrument instead of a puzzle game (which is what the manual claims), the game is still pleasant on the ears.  As an added bonus, there’s an impressive sound sequencer in the game called a Sound Box that lets you pick different samples and change the tempo among other things to create your own music.  I spent as much time playing around with the sequencer as I did playing the actual game.

In most other puzzle games, I like marathon mode better than versus mode because it’s easy to just zone out and try to last as long as possible.  I felt the opposite way about Gunpey DS. Marathon/Endless mode wasn’t very exciting. I felt like I was playing the same thing over and over again.  Maybe the difficulty change was just too gradual, but I felt like the game didn’t get any harder the longer I lasted.  I would have enjoyed Endless mode more if the music had been better but I felt like there was no reward in playing it.

This may not be the next Tetris, but it’s a decent game to whip out while waiting for the train or for a short plane ride.  Q Entertainment made the game’s menus and controls reminiscent of Meteos’s.  Any fan of Meteos would be satisfied with Gunpey.  The game doesn’t play as fast paced as Meteos does, but it still has a certain frantic nature.