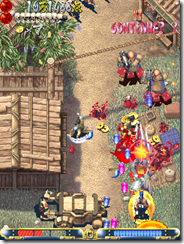 Itching for another Cave game after playing Deathsmiles? Then keep your eyes out for Guwange, one of Cave’s earlier works.

Makoto Asada, a Producer at Cave, announced Guwange will be released worldwide on Xbox Live Arcade. Asada’s blog post also mentioned Guwange will be localized in English. Guwange has three playable characters and takes place in ancient Japan. You shoot demons and other figures from Japanese mythology. Think Muramasa: The Demon Blade style creatures in a vertical shooter.

A release date was not announced at this time. Whenever it comes out, Guwange will be Cave’s first game on Xbox Live Arcade.

Thanks for the tip Matty!