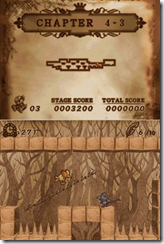 Prope’s next game, Ivy the Kiwi?, has a simple premise get the Kiwi to a goal.

If this were any other platformer you would move the Kiwi with the D-pad and, perhaps, jump with A. But, you can’t directly move the Kiwi in Ivy the Kiwi?. Kiwi walks on its own. You guide it across pits lined with deadly spikes and over stacked blocks by drawing vines.

It’s a little like Kirby Canvas Curse, but the chapters are smaller and you have more “drawing power”. Players can create three vines at any time. Make a fourth one and the first vine you made disappears. Momentum from drawing a swinging vine also carries over to the game. Well timed vines make Kiwi hop over obstacles. If you’re fast enough you can catch Kiwi and toss him through the level.

You can also launch Kiwi by pulling a vine back with the stylus and letting go when Kiwi is near it, sort of like a bow and Kiwi arrow. When propelled, Kiwi crashes through blocks and rats. Yeah, that rat in the screenshot is as dangerous as a sharp spike. Touch one of them and Kiwi dies, sending you back to the start of the chapter. Aside from Kiwi-slamming, you can “defeat” rats by slingshotting them off the screen or trapping them with vines.

Getting to the goal in the five demo levels wasn’t too much of a challenge. Collecting the ten feathers scattered in each level was trickier. I still haven’t been able to do anything close to this. The final game comes out for Wii and the DS on April 22 care of Namco Bandai.