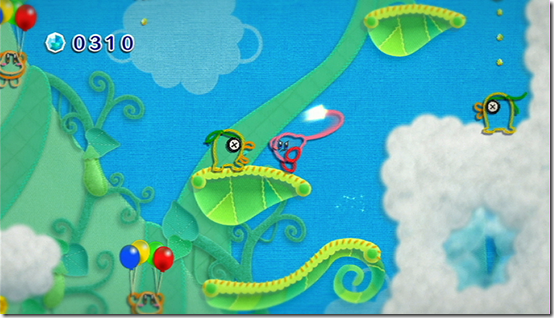 The instant I heard Kirby’s Epic Yarn was playable, I made sure to find out exactly where it was so I could test it out. I was enchanted with the game after seeing the short glimpse during Nintendo’s press conference, and knew that I couldn’t wait until fall to actually play it. When I arrived at the Kirby’s Epic Yarn demo stations, I realized I wasn’t the only one – there were at least eight people in line for each demo station. Good thing it has two-player co-op! The man standing next to me in line was tasked with being Kirby, and I was given the role of Kirby’s blue, crown-wearing sidekick, Prince Fluff.

It turns out everyone played a demo level, designed to teach players how to use Kirby’s abilities. Kirby no longer inhales enemies – he whips them with yarn. The whip can be used to quickly attack, or unravel the enemy was made of to throw as a projectile.

The first part of the level was fairly simple. We had to collect beads that may appeared and make our way through to the end. Kirby and Prince Fluff can transform. Pressing right twice turns Kirby or Prince Fluff into cars, which dash forward. Pressing jump in the middle of a jump turns both of them into parachutes which glide safely down to the ground. Grabbing a button with the yarn whip turns Kirby into a wrecking ball, which can swing around to do damage or build momentum to vault to a higher location. Pressing down in the middle of a jump turned them into anvils, that could crash through floor blocks. Jumping into water turned them into submarines.

There was one other incredibly cool transformation we encountered. At one point Kirby and Prince Fluff teamed up to form this mecha robot. In our case, Prince Fluff (my character) was the body and Kirby was the pilot. So player one controlled attacks while I controlled missiles and movement. In order to change the path of the missiles, I would have to turn the Wii remote. 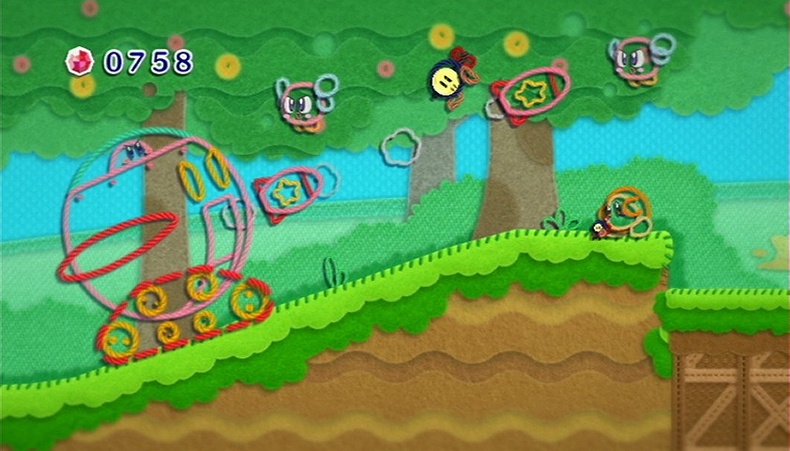 Everything takes place in a soft, fabric world. (It looked great on the HDTV!) Treasure chests are patches, which Kirby or Prince Fluff rip off of the background with a yarn whip. Zippers in the background can be grabbed to open new areas. There were also spots where Kirby or Prince Fluff could "enter" buildings or trees and go underneath the fabric. You’d see a lump moving underneath as they’d wander towards another opening. 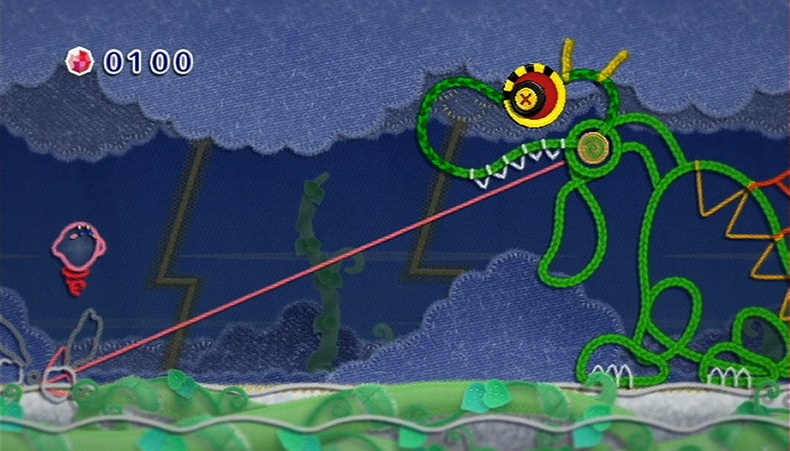 The Kirby’s Epic Yarn demo ended with a boss battle. Though it seemed tricky, there was nothing to fear – there was no way to die in the demo. A gigantic yarn dragon appeared to attack Kirby and Prince Fluff. He’d shoot out his pointed tongue a few times to attack, maybe exhale a few fireballs. The key was to perform a hold attack so Kirby or Prince Fluff would grab the fireball, then shoot it back at the dragon.

After dodging a few tongue attacks, a yarn clump/button would dangle out of the dragon’s mouth, signally it was exhausted. I grabbed this, pulled back a few seconds, then let it snap back to hit the dragon. After doing this three times, the dragon fell and the demo ended with me and Prince Fluff victorious.