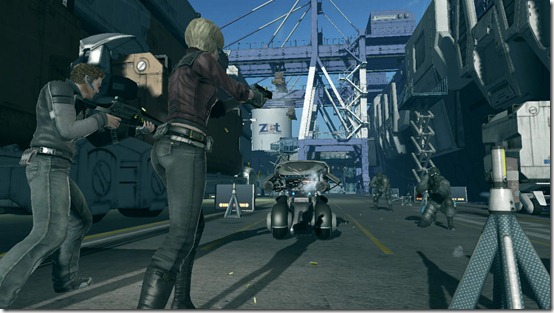 Sega isn’t the only Japanese publisher with a third person shooter. Square Enix has Mindjack, which is also slated for October.

The E3 demo was only limited to multiplayer and it began without a character to control. The screen was orange and distance markers let me know where non player characters were. As a hacking presence, I could float over objects, but not through walls. Finally, I found a mind, and more importantly, a body to hack into. I entered the helpless person’s conscious who wrestled with the idea of being hacked for ten seconds. I suppose that was why the NPC made a headache-like gesture.

After I captured a body, Mindjack felt like any other third person shooter with a deathmatch mode. Left trigger to aim, right trigger to fire rounds. One interesting note about hacking is you inherit whatever weapons the non player character had on them. Hacking a riot ready soldier might give you a rocket launcher. An office worker may have a pistol or machine gun. I hacked an average Jane with a machine gun and ran through the futuristic office building into an open area with a multiplayer firefight.

I threw a few grenades, shot an opponent (I think) and died two minutes later. A player called game director killed me. For a second, I wondered if a developer was playing from far away, but never had a chance to ask if this was the case. The other players were standing at the booth and there was one more Mindjack player than there were stations. Never mind. I had to find another body. This time I stumbled onto a soldier and got a slow firing rocket launcher. Since I hacked a character further away, I was able to sneak into the action. Take note, you can pick your respawn point when you die.

Two bodies later, I discovered a glitch. The demo level had sliding doors and I saw another player hiding behind them. Well, I thought s/he was hiding behind them. The other player was actually stuck. Even when the doors opened an invisible wall blocked us from passing through. I tried picking off other players, but I was basically a sitting duck. I got shot, but still couldn’t pass through the doors in hacking mode. So, I reclaimed the body I just lost and ran down an escalator. When I did this the floor textures, then the walls, and then everything – except the other players disappeared. Mindjack restored the graphics when I climbed the other escalator, but I was still stuck. The only option was to restart the demo and capture another body.

The most fascinating part of Mindjack wasn’t demoed. Square Enix says players alter the universe with each hack. They’re calling the game a virtual playground that everyone can alter.