I played a bunch of Marvel vs. Capcom 3 yesterday and skipped past the familiar characters to test out the newcomers first. M.O.D.O.K., a villain from the Marvel universe, is a range character. A close range psionic blast, the last move in a basic light-medium-heavy combo, can miss another player if you’re standing too close. 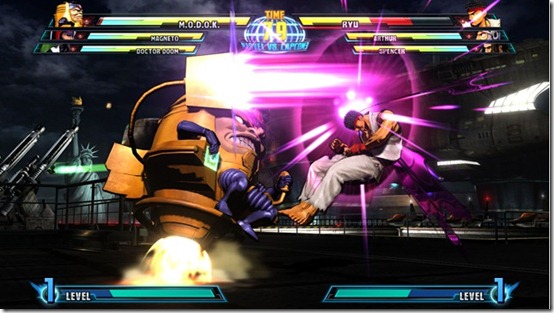 M.O.D.O.K. has a wide range of projectiles like a spike ball missile and a pile of green goo at a 45 degree angle. It deals a bit of damage if it hits, splashes onto the ground if it misses. His Psionic Blast is a straight-forward energy beam with a hadouken motion (QCF + attack). Cable’s Electrap lives on as the Analysis Cube move. This makes M.O.D.O.K. throw a grenade with an arc that detonates in mid-air. It’s possible to hit another player with the Analysis Cube and follow up with a Psionic Blast.

While most of M.O.D.O.K.’s attacks are ranged moves, he can dive and crash into an opponent with a headbutt. M.O.D.O.K. can also fly for a few seconds to damage enemies with mid-air exhaust flames. These blasts act like jump kicks, pointed downwards with a 45 degree angle. One of his super moves is a Hyper Psionic Beam. It’s pretty much what you would expect, a Proton Cannon-like attack.

Wesker from the Resident Evil series is a trickster with his teleports. It took a few rounds, but I got the hang of dashing and teleporting backwards to fake a player out. It was predictable after doing it more than once, but I followed up with one of Wesker’s super. Remember Spider-Man’s Maximum Spider? Wesker has his own take on the move where he knocks an opponent in mid-air and bounces around the screen. 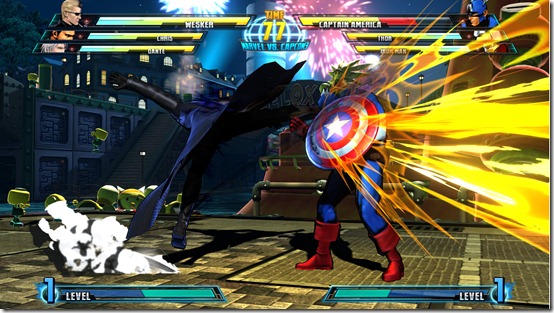 Capcom gave Wesker an uppercut and super move counter. You need to be in close range to use his second super, but Wesker can turn the tables with a jab to the gut. Wesker has a gun, but he doesn’t use it much. His moves are mostly heavy hitting punches and kicks. If you end a combo with a standing heavy attack, Wesker will pull it out and shoot an opponent in the foot.

Another Marvel vs. Capcom 3 character gives a nod to Mortal Kombat. When Spencer from Bionic Commando uses his bionic arm to grab an opponent he shouts Scorpion’s catch phrase, "Get over here!"

We’ll have more on Marvel vs. Capcom 3 when we return from CES.