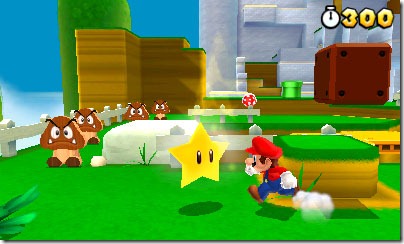 Taking a page from the Art of War, the Goomba army made itself look larger with wooden Goombas. These don’t move or hurt Mario, they just stand in place as a distraction. I quickly met a new addition to the Goomba family — the Tanooki Goomba. These guys swing their tail and can hover a bit. Jump on one and you might get a leaf, the power up that turns Mario into Tanooki Mario. 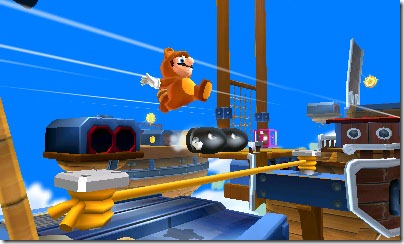 This power up lets Mario float to the ground and hit blocks on the floor with his tail. You cannot fly like in Super Mario 3, however, just glide to the ground by holding B. Mario has his other usual abilities too including a Goomba crushing ground pound, which you can do by jumping and hitting L. The R button makes Mario crouch and enter pipes. Three star coins were spread inside the level to find.

You can also grab other powerups — a familiar fire flower and a star that makes Mario temporarily invincible. I cleared the first level quickly and was rewarded for doing so – the remaining time on the clock was converted into coins. 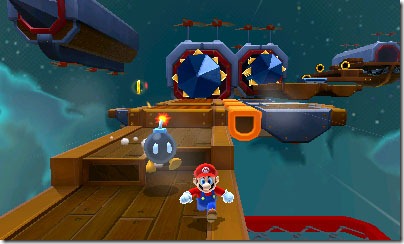 I skipped all the way to level 2-5 next. Remember the pirate ships? They’re back. This stage had Mario leap over blue flames and walk across a springy tightrope while Bullet Bills were shot towards the screen. Early in the level, I discovered a new kind of purple block. Touching this whisked Mario to another ship filled with coins and a power up block you couldn’t get to otherwise. Jumping from ship to ship I reached a pipe and an angry red Koopa. This mid-boss wound up and spun around like Haggar from Final FIght. Even if you land on his head Mario still takes damage.

The only thing you can do is dodge. After spinning around, the Koopa is momentarily stunned. That’s your chance to ground pound him! Knock his noggin three times and the room fills up with coins. Koopa defeated and level completed, I moved on to the next game.