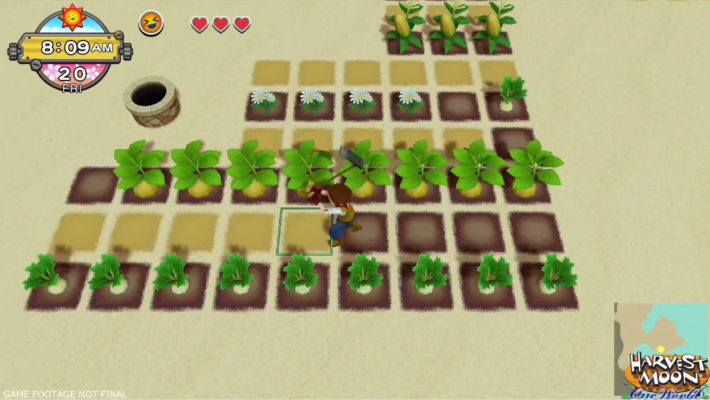 Back in May, Natsume announced Harvest Moon: One World, the latest game in their own take on the Story of Seasons/Bokujou Monogatari series. Today at New Game Plus Expo, we got a first look at gameplay for the recently announced title.

Check out gameplay below:

As you might expect from the subtitle, Harvest Moon: One World focuses on giving players a vast world to explore, which isn’t limited to just a town and its surrounding areas. Natsume introduced several areas you’ll be able to explore, such asthe Halo Halo beaches, the Salmiakki mountains, and other regions that are ripe for exploration. This is in addition to the boxart, which shows off plains and a desert region where you’ll likely be able to grow different types of crops and raise different animals. You’ll be able grow crops in any of the areas, without being limited to farming within certain farm patches like in the previous Harvest Moon game by Natsume, Light of Hope.

That said, there will still be a traditional town, and we got a look at the town in Winter, as well as some villagers, in the trailer.

Harvest Moon: One World will release for Nintendo Switch and PlayStation 4 in Fall 2020. Check out the full box art and more info on new crops in our previous report here.