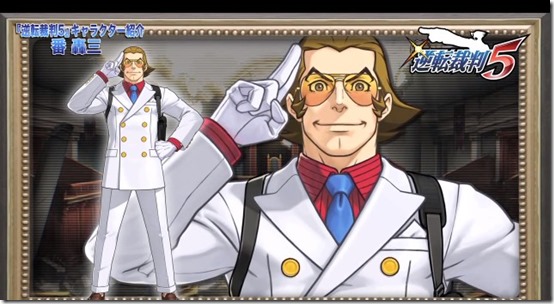 Bobby Fulbright is a new detective in Capcom’s upcoming Ace Attorney: Dual Destinies. He is known as the hot-blooded detective who is often heard shouting his catchphrase “In justice we trust!” The super detective gets some time in the spotlight in his episode of the game’s character introduction video series.

Detective Fulbright is actually a close friend of Simon Blackquill’s, the prosecutor currently serving a murder sentence, having worked with him on countless occasions.

Scenario director Takeshi Yamazaki describes Fulbright a hot-blooded man, especially when he’s fighting in the name of justice, and he may perhaps be too hot-headed at times. As mentioned above, his catchphrase is, “In justice we trust!” which you’ll be hearing on numerous occasions, from the moment the crew first meets him in Ace Attorney: Dual Destinies.

Fullbright is a hero-minded character, who investigates for the sole purpose of justice. He wears a white suit, which serves a purpose of accentuating his representation of justice. Whenever someone doubts him to be a detective,  he intensely pulls out his police badge, which he keeps in a gun strap.

Bobby Fulbright is a man of many emotions. We’ll see him crying, laughing, getting angry and happy. He expresses his feelings in a very exaggerated manner, which Yamazaki feels makes him quite the amusing character, especially with his animations.

Ace Attorney: Dual Destinies was released today in Japan and will be coming out this fall in the West on Nintendo 3DS.